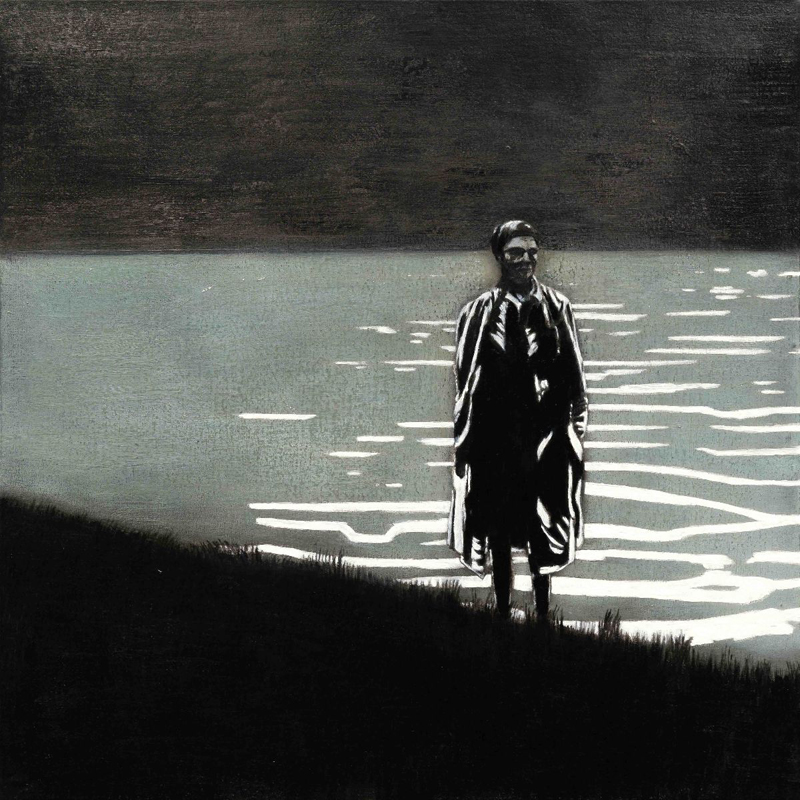 Last summer, as a result of the UK’s prolonged heatwave, ancient archaeological features began mysteriously appearing in our countryside visible from the air, only to vanish again when the rains came. For a short time, you could detect the outlines of ancient farms, burial mounds and neolithic settlements. I was reminded of this when viewing Naomi Frears work in her new exhibition at London’s Beaux Arts Gallery.

For beneath the surface of her paintings are layers of previous incarnations of the work, often going back many years, that bleed through and increase their enigmatic atmosphere. Frears has a constant urge to re-work them, sometimes bringing them back to nothing over and over again when they don’t feel right. “I’m like a bad gambler who can’t walk away from the roulette table,” she tells me, smiling.

For example, in the picture above there are remnants of two figures that once inhabited the picture. In good light, you might even see the almost subliminal outline of a swan.

Good light is something Frears is used to. Her studio in Cornwall was previously occupied by Francis Bacon who described it as “the best room in St Ives”. With one huge window overlooking a surfing beach with a skylight above, the light that many St Ives artists regard as special comes flooding in. “Even when it’s grey it’s bright grey in St Ives,” she insists.

The figure in the painting is faceless. It originally had one but she scratched it out. When I ask her why, she has no explanation other than it just didn’t want to be there. She compares the painting to the last frame of a film. Frears is a filmmaker too. Her latest project entitled All Going Nowhere Together involved a choreographed performance of more than 40 cars in a car park in Cornwall.

Mum in ’69 is based on a tiny photo of her mother which she flipped the other way around to make it “more difficult and, therefore, more interesting”. The matching jewellery caught her eye and she highlighted it with a whiteness that contrasts well with the dominating rich maroon colour.   It also punctuates the openness of the drawing.

“In every painting there’s always something I’ve never tried before. I’d never even attempted to paint what someone was wearing.”

Another relatively new departure here is to draw figures with their eyes open. It’s something she admits to never even considering a few years ago because she didn’t want the subject to hold too much presence.

The picture above features another faceless figure, however. The painting is striking in the enormous amount of room she’s given the subject which itself is quite minimalist. It provides extra focus as it draws you in. The woman appears lost in abstracted space though judging from her somewhat defiant pose, seems not unhappy about it. The image reflects the artist’s feelings while painting it. “I thought that other things were going to arrive. The fact that she looks like she’s waiting for other things to arrive meant I just kept liking it.”

There are more abstract elements to this and other of Frears’ works in that there is no specific time, place, light and so on. It gives her a connection, other than location, to the abstract artists of the St Ives school. The fact that Baby Grand’s subject is dressed in a 1950s playsuit is also curious. Frears was left a stack of old Vogue magazines from decades ago by a fellow artist who was vacating the studio above hers. After a decade or so later, some of the images that had imprinted on her mind started to filter into her work.

The light-blue figure in Pool positively glows against the rich, dark blue background. It’s based on a bronze sculpture of the risen Christ she saw at a Royal Academy show a few years back, though only the gesture of the arm outstretched to show the holes bears any resemblance to the original. The title came from an Alhambra pool that was featured but was eventually dispensed with. This is a work that has been worked on time and again. The odd texture of the torso comes from a lot of scratching and painting with broad brushstrokes.

Frears’ original training as a printmaker has been a big influence on her process. “When you’re making an etching, it can take weeks and weeks to make. I know that it’s going to be destroyed, re-made and that different things are going to happen to it within the course of its life and I was doing that before I was doing painting. So it feels normal to me to keep bashing away at something and taking everything off and starting again. That doesn’t frighten me.”