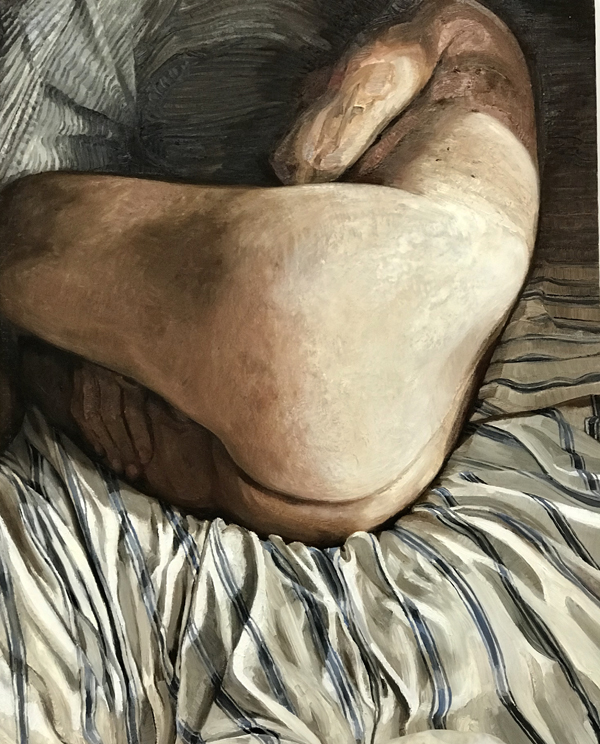 In her new solo exhibition, Three, British artist WK Lyhne (a Danish surname pronounced Luna) presents three paintings, each of a nude figure captured at a moment of unguarded intimacy, lying in bed among rumpled sheets and blankets.

These oil paintings, done from life, mark a significant departure from the artist’s previous works. These would often comprise provocative images of slaughtered animals dripping blood or large-scale defiant figures in sexually charged explicit poses. They might not have appealed to the prudish or those with a weak stomach, but they took a hefty swipe at female objectification.

Lyhne’s new approach seems to reflect the essence of the self-portrait of Rembrandt as an old man, a print of which hangs high on a wall of her London studio casting a watchful eye on her artistic efforts. It exudes the air of one reconciled to what life has served up.

“The work I painted in the past was much more shouty and much, much, much bigger,” Lyhne admits. “I had a very difficult set of personal circumstances and got quite cross. I was cross about lots of things but it’s not defining anymore…I’m much more philosophical.”

Philosophy is but one interest in Lyhne’s broad hinterland. She originally trained as an architect, she has work at the Royal Academy and teaches at Chelsea College of Art where she is also studying for a PhD on the image of Agnes Dei, the sacrificial lamb. She has consistently used animals as allegorical representations of our other, darker selves. Video, drawing and ceramics are further strings to her bow.

The bedclothes are painted with the same vigour and fine detail as the figures themselves and give the pictures all the more intimacy. “An environment that is considered at every point,” says Lyhne, “is to me like the kind of weight that we are all figures in an environment, we are the figures in a Lowry landscape. They’re small and infinitesimal but, at the same time, their relationship to the landscape is as powerful as the figures themselves.”

You can see this in the image above which is as much a portrait of the bedclothes as the woman. Every fold, every crumple, every detail of the shadows and striped pattern of the blanket creates a symbiotic effect of fleshiness. “The older me would have got some brown and smeared it and say that’s a shadow. The new me says what actually does a mattress look like when you touch it when it’s in shadow.”

To further this point, Lyhne has included in the exhibition a series of three smaller canvases serving as studies of the fabrics that you see in the larger works.

The Rodin-type pose of the figure above enables Lyhne to both preserve anonymity and to allow more room for shadow within which she maintains the darkened detail. The rendering of light is a crucial aspect of her style.

It’s particularly noticeable in Three (I) above, the most complex of the three portraits. Here we have two light sources – a lamp by the bed at the back and daylight at the front. The lamp light is yellow, the daylight is white. This creates complex shadows involving a movement from yellow to grey.

There’s a suggestion of eroticism here too, not confined to the pose. One of the pillow cases has burst, unable to contain the pillow, and the sheet, part of which is falling out of the picture, has been rucked up enough to reveal bare mattress on which, incidentally, a coffee stain is evident. The lines on the thighs emphasise their heft. Lyhne painted and re-painted the foreground several times in the work which took four months to complete.

There’s an air of declining physicality in all these works that Lyhne achieves by using thick lead white paint that she has applied with a gun. The paint ends up like curdled milk on the figures’ bodies, resembling flesh itself with all its marks and blemishes. There’s a nod here to the French philosopher Julia Kristeva’s notion of abjection. It’s a theme that has recurred in Lyhne’s oeuvre. What she has termed the daily humiliation of the ageing process only ends with death which she calls the ‘ultimate reality’.

Her choice of using the bed as the location for her portraits, she says, echoes the words of another French philosopher. “Montaigne wrote that you are born in a bed in a room in a house in a village in an environment in a community and you go out in the world. There’s quite a power in the fleshiness in the place we inhabit for a third of your life at both birth and death.”

All images are courtesy of the artist and gallery