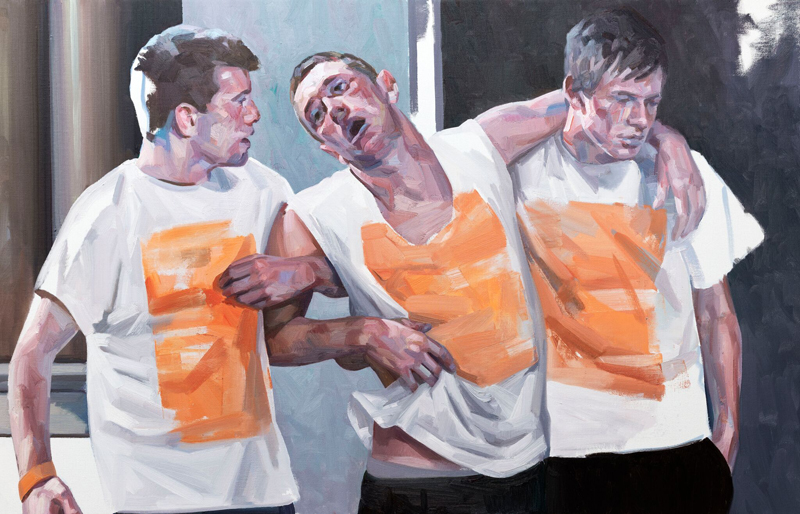 Many will know Tai Shan Schierenberg as one of the judges in the Sky Arts series Portrait Artist of the Year and Landscape Artist of the Year. He specialises in both art forms and is a former winner of the National Portrait Gallery’s John Player Portrait Award. Lesser known is his love of football. Last year, he travelled up from his London home to the West Midlands every weekend to follow the fortunes of West Bromwich Albion Football Club for a Channel 4 Artist in Residence series.

The artist became immersed in a very masculine world. The experience was revelatory. “We went on this wild, roller-coaster ride of a season where they ended up being relegated but with a little blip in the end when you had the hope that kills you. It was an extraordinary experience for me being swept up in this group emotion,” he tells me as he walks me round his show.

His new exhibition, Men Without Women, the title taken from an Ernest Hemingway book, is not a series of paintings about football. Rather, by spending time with players, managers and fans, the artist came face-to-face with the kind of characteristics that make up our view of masculinity today, and he has distilled them into his new works.

Take the top shot, No Man Left Behind, for example. With his signature broad, gestural brushstrokes, Schierenberg’s depiction of three lads out on the town is multi-layered. It conveys aggression through the middle figure’s drunken demeanour. There’s camaraderie as they all sport a shared identity through their T-shirts though the one in the centre has cut the sleeves off in a show of individuality. There’s a sense of caring too as the pair either side look after their worse-for-wear comrade, tempering his belligerence and/or protecting his vulnerability.

The only specifically football-related picture is of the team in pre-season training in Austria, above, already aware of the difficulties they faced ahead. Schierenberg recognised the footballers’ obvious highly competitive nature yet was surprised by their sensitivity to the fickle nature of fandom.

“You come out with 27,000 people screaming for you and then a couple of results go against you and suddenly they hate you. To see them fall apart on the pitch was quite extraordinary. To hear the fans scream at the players to the point where they couldn’t complete a six-foot pass really gets to you.”

Schierenberg conveys such emotional states in a nuanced way here. Heads are bowed, the mountain ridges are suggestive of graph-like highs and lows while ominous dark clouds hover above.

The vitriol screamed at players by fans when their team is performing badly is a feature of all  sports of a tribal nature. It’s a standard way of channelling aggression, an escape from the humdrum of everyday life. Nowhere is violence more formalised than in boxing. The title of the work above alludes to the idea of violence being romanticised in our culture, starting in teenage years.

“The idea of vengeance and violence is an idea that men play with a lot and so I thought boxing was a prime example of the ritualisation of violence.”

Schierenberg has taken boxing images from the internet, collaged and then reinterpreted them. He has dragged, pushed and scraped the oil paint, once again with those trademark broad, gestural and brightly coloured strokes, until he has reached the desired effect. And that effect is that the fighter on the left has been genuinely hurt by the punch and his opponent is relishing the fact. The different backgrounds to the figures emphasise an invasion of space.

Teenage boredom is sometimes sated through reckless driving at high speed on country roads. Schierenberg spent his formative years working in the woods of the Black Forest in southern Germany. His father had been sent there during the war and returned there years later. “My father was a tyrant and a lot of my masculinity had its roots there as well,” he admits.

The burning car, above, is a reminder of friends who came to grief on high-speed drives through the woods in what he has called ‘country pursuits’. “It’s all about getting away from isolated hamlets into the local town. The boys were trying to escape the gravity of the landscape.”  Nobody he knew actually died, hence the open car door. The image serves as a metaphor for the destructive and self-destructive issues of male identity.

On the other hand, just as the footballer and manager seeks solitude to escape the pressures of the profession, so nature can offer solace to the stressed in a kind of mystical connection. Walden, above, is an almost surreal image of a man bathing in rural waters to ease his troubled soul. The football cliché of “a game of two halves” becomes here a painting of two halves. The coolness of the green tones of the foliage in the top half is balanced by the brightness of the water at the bottom, divided by a red line of what could be earth or sand. The firmness of the trees contrast with the almost abstract reflections in the lake.

Tai Shan Schierenberg manages here, and in all these works, to paint the subject in a way that gives him the opportunities to make the work interesting. It’s a cathartic process. “You paint because you’re trying to find out something or actually find out what you feel about the subject. Then something happens to the painting that moves the painting programme forward but there’s also something about the subject matter that captures you. I’ve got no plan, maybe other artists have a plan but I don’t (laughs).”

One thought on “Tai Shan Schierenberg – Men Without Women”