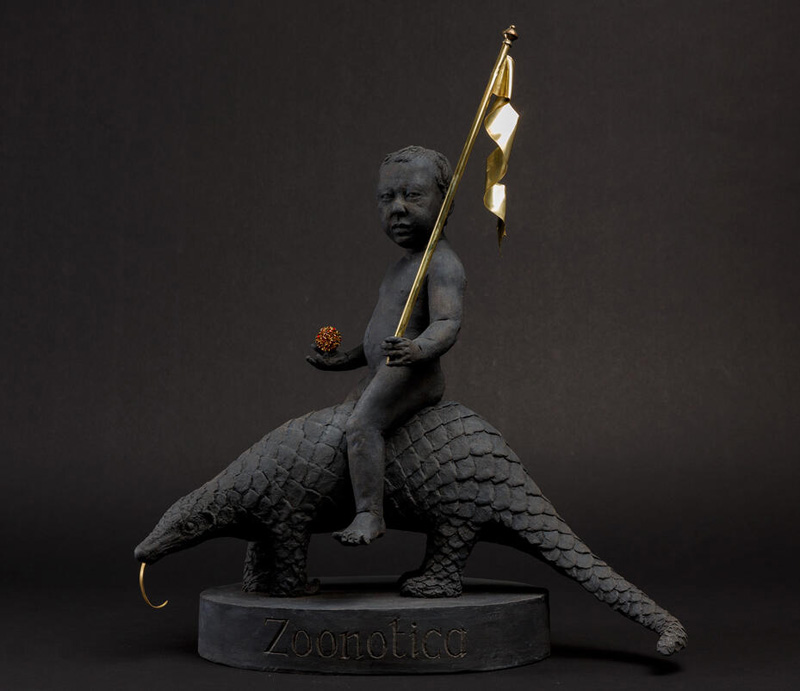 In the 18th and 19th centuries, it became something of a rite of passage for upper class Europeans, mostly from Britain, to embark on the Grand Tour taking in cities such as Paris, Rome, Venice and Florence in order to learn about Classical and Renaissance art and architecture. They’d accumulate works and souvenirs as they did so. Four artists have given a contemporary spin on this phenomenon in Grand Tour at London’s James Freeman Galley.

The topshot, Zoonotica, is by ceramicist Claire Partington whose work often relates to the human relationship with animals, particularly the way in which people can use animals as props with which to present themselves. The piece is presented as a classical form with the pagan child-god riding a pangolin clutching a Covid 19 virus in his right hand and a triumphant knight-like banner in his left.

The pangolin, a beautiful creature, is the most-trafficked animal in the world and was being sold in the Chinese wet market where the virus is believed to have been passed from animal to man, hence the title. “It’s not just about Covid,” says Partington, “It’s about people going into environments and ruining environments.” The piece is hand-constructed in black earthenware clay and mainly coil built. She has also used the same motif for a series of classical-style souvenirs in a mixture of porcelain and red and black stoneware.

Matt Smith’s elegant earthenware candlesticks above, represent a pair of Georgian Grand Tourists. They’re the product of three firings and are heavily glazed not only to suggest how naive simplicity can underlie a veneer of sophistication but Smith is using a veneer as representing the glossing over of different parts of history. “They’re both beheaded, with a candle-holder instead of a head,”says Smith. “I’m talking about the silencing of people who aren’t heard any more and have been edited out of history – women, queer people, the working class, people of colour, people who aren’t necessarily able – quite a few of us really.”

Some other of his figurines in the show are lustered with metal oxide so that they will shine well in low light, reflecting the Georgian domestic scene of using mirrors to boost candlelight. Other of his pieces are cast from moulds from the former Spode factory in Stoke-on-Trent left over from when it closed and moved to the Far East. “All above board,” he insists with a grin.

James B Webster’s sculptures draw on classical forms and ideals but with contemporary sensibilities. Busts like these were the quintessential Grand Tour collector’s item especially ones that are small enough to carry around . Rather than depicting the so-called great and the good, however, Webster has sculpted contemporary faces that he finds interesting and he has given them expressions of everyday vulnerability.

The contrast between the hard exterior and fragile interior he expresses through his choice of materials. The busts are made from porcelain and mounted on a type of concrete made from a by-product of iron ore extraction. “I wanted them to be classical in format and texture,” he tells me, “and then mount them on something average that we can all identify with, and concrete is something we can all associate with now.”

Another Webster exhibit, a porcelain sculpture of two Greek Wrestlers carries all the connotations of Classical prowess, but also a homo-eroticism and, again, an underlying fragility in the nature of its material.

The 18th/19th century architect Sir John Soane specialised in neo-classical designs that he researched on his own Grand Tour. He designed hundreds of buildings all over Britain, most famously the Bank of England, his London home that now houses a museum bearing his name and his former home at Pitzhanger Manor in Ealing. However, many like the Bank, were demolished and many others remained unbuilt.

Luckily, his illustrator Joseph Gandy drew them all. Emily Allchurch, the subject of the most recent Considering Art podcast, has used his illustrations as a template for recreating his works as a 21st century digital photographic collage presented as a lightbox. Ingeniously, for the unbuilt ones, she has seamlessly assembled together sections of different neo-classical buildings until they combined to resemble as closely as possible Soane’s intended designs as if they’d been built 200 years ago.

The observant and intrepid among you might recognise Arthur’s Seat in Edinburgh and Scafell Pike in the Lake District as the background setting. Allchurch has also contributed to the exhibition another work featuring all of Soane’s completed buildings in one scene along with Sic Transit Gloria Mundi (after Piranesi), a 21st century re-versioning of Piranesi’s Via Appia Antica. This year marks the 300th anniversary of Piranesi’s birth and he is an artist whom Sir John Soane met during his Grand Tour.

These are delightful samples of work from four artists at the top of their game, well worth making your own grand tour to see. The James Freeman Gallery is at 354 Upper Street, London, N1 0PD.

The exhibition runs until 7 November 2020.