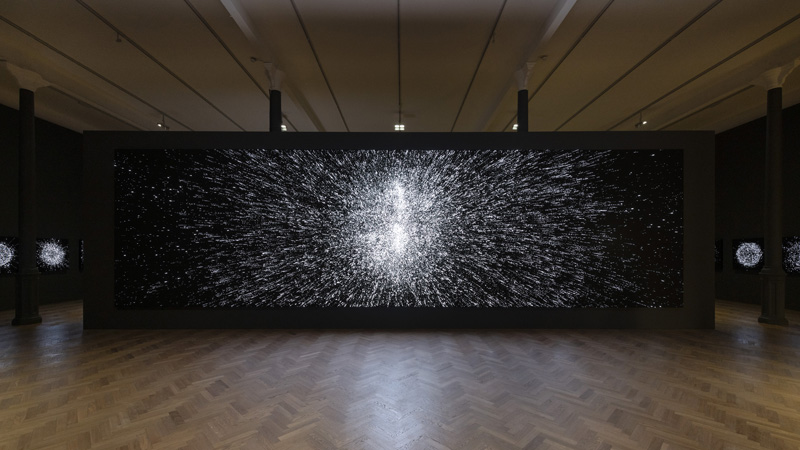 A silver sun sends out waves in pulses that suddenly dissolve into a swirling mass of tadpole-like shapes. A molten core waxes and wanes while shooting stars erupt around it in seemingly endless and varied sequences. These white light installations, one nearly 40 foot wide, some as individual pieces, others as triptychs, are by American artist Leo Villareal in his first solo exhibition at London’s Pace Gallery.

Villareal uses his own programmed software to induce beguiling patterns from lights on both LED and OLED screens. The exhibition coincides with the recent launch of his Illuminated River, a major public commission that will see all of London’s 14 bridges lit up in spectacular displays. Four bridges, London, Cannon Street, Southwark and Millennium have already been completed. The rest will follow over the next couple of years.

Villareal trained as an artist in installation, video and sculpture using light and found objects. He had also been a computer nerd since his early teens. It was some 30 years ago that he first hit on the idea of using lighting displays as his chosen art form. He was in the remote and barren Black Rock desert of Nevada while attending the Burning Man festival, that annual event in which a self-reliant community explores all manner of scientific and artistic expression. He takes up the story.

Today, his sophisticated LED works can be seen all across America including on the San Francisco-Oakland Bay Bridge. Leo Villareal took time off to talk to Considering Art about his new installations.

“There’s a lot of improvisation and the engagement of chance in the process of making the work. I’m very interested in the concepts of artificial life and emerging behaviour, so setting up certain conditions without knowing what will happen. You’re engaging processes which you don’t necessarily understand. This is done a lot in programming. You set a problem and the code will come up with some solution that a human programmer could never decipher how it could possibly solve that problem but it did. So I’m waiting for those moments in which I’m surprised that something compelling occurs that I didn’t expect and I capture those moments and they become the building blocks of the final artwork.”

Can you give me an example of what you mean?

“I might see a certain pattern or a certain form that attracts me or the way that things are going from a form that then dissolves, it just depends on the moment. I don’t necessarily know, so I have to feel very comfortable trying things out and spending time with it and learning through that process. Once I’ve gathered these moments then there’s another layer of composition that occurs where there are many layers happening simultaneously which are randomly being displayed in a random order for a random amount of time. And then there are some other temporal effects that create this kind of blurring of time so things become softer. It’s a pretty heady mix. It’s not generative, it’s not doing things I’ve never seen before.”

How much is your knowledge of art and art history evident in the controlled aspect of your work?

“I’m very interested in the history of art and the history of abstraction and connecting to very old ideas that artists have been grappling with forever. In the making of the work in the gallery, I started seeing these radial forms that I’d seen before and I looked on my shelf and I found this Gustav Doré book of the etchings of Danté’s Inferno and finding these parallels between these etching marks and the texture that the LED array had. Obviously very different materials but a certain echo, and of course these etchings are still images but taking those things in a way and bringing them to life was quite interesting. But I’m also not making scientific visualisations. I’m not trying to illustrate some particular concept. I’m very interested in finding my very own way through this. I’m literally manipulating millions and millions of particles. I’ve an extremely complex  physics model that I’m manipulating. It’s way beyond my understanding. I’m not a physicist or a mathematician but what interests me is if I can find certain parameters and find certain moments then the more complex it is the more interesting it is. It doesn’t matter to me what exactly is happening, it’s just really what the visual manifestation is.”

Then it’s up to the viewer to interpret it for themselves.

“I think there’s something compelling about those things that I’m bringing back. I think what’s interesting about the work, really the magic of it, is how it connects to these very universal and human responses, like how we respond to the movement of water or watching a sunset, these things we’re attracted to.”

“In this case it is but it’s something we’re universally attracted to like looking at the stars at night and these things that surround us. But to harness that sense of wonder and magic is what I think  is something I’m working towards. It adds up to way more than just some LEDs and code which sounds very artificial and cold but there’s something that’s occurring which is pulling these things out of people and eliciting certain responses. It’s interesting to me to watch people entering the exhibition and to see how they respond to the work.”

You don’t use colour in these works.

“Not in this show. I mean I love colour and I’m using it in the Illuminated River and I have different paths through my work. I was interested in keeping it monochromatic in this case to really focus attention on the sequencing and the programming aspect to it.”

You mention Illuminated River. You’ve done four bridges and you have 10 more to go. How do you decide what patterns and sequences to take? I know that some of your past work has taken into consideration some of the character of the environment around your installation, are you trying to do that in this case or are you simply choosing 14 different computations?

“For me it’s about spending time on site. I’ve spent night after night on the banks of the Thames looking at the bridges and the river and the atmosphere and responding to the site. All the movement is inspired by the kinetic activity that is occurring, primarily the Thames itself which rises and falls five metres twice a day like it’s almost a living thing. It’s quite extraordinary to spend time with and the movement of traffic. There’s so much happening in the centre of the city. So all of those things factor in some way. I’m not being very literal about it either. I’m not using sensors or any video to take data and display it which is all possible, but I find that not interesting over the long term. It has to add up to more than that. So, in a tech context I describe myself as a sensor. The heart is a sensor, certain things pass through and certain things don’t, certain selections are made. That’s my interpretation of it. And when you’re sitting in front of it you start to see these echoes and these moments in which a movement of light suddenly aligns with a bus that’s moving by. So you have that connection, for the brain can’t help but recognise patterns so you put those things together. So it’s not literally connected but you start to see these couplings but it’s a loose coupling and it’s sort of slippery but I think that it does really create something that changes the perception of the bridges and highlights the beauty of what’s there and feels appropriate to the site.”