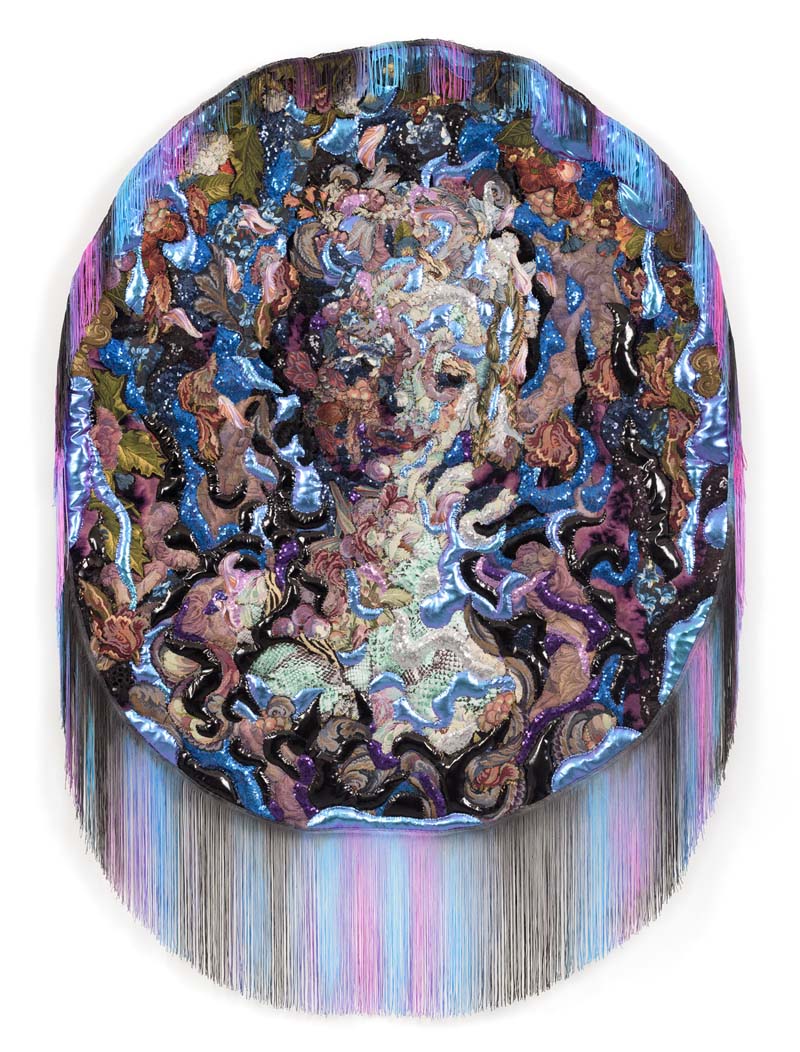 Beauty and what defines it is the overriding theme in this two-hander at the James Freeman Gallery. Both Anne von Freyburg and Nigel Grimmer, in their different ways, investigate the way beauty is both constructed and distorted, and both use textiles to help make the point.

In her large-scale works such as in the top shot, Untitled (after Fragonard), von Freyburg has taken Rococo portraits as a starting point and subverted them using paint, ink, hand-stitched tapestry and synthetic fabrics to create large elaborate pieces that are multi-layered both physically and conceptually. Why has she done this?

Well first, her artworks embody a rebuttal of the predominant view in the art world that denigrates craft and the decorative. “If you hang anything on a wall, it is decorative,” she tells me resolutely. “Thinking has become more important than making. It should be equal…I wanted to make a full statement that textiles and painting can have a dialogue together.”

She speaks from the heart. She followed in her father’s footsteps by studying fashion design for her first degree before taking an MA in Fine Art at Goldsmith’s in London where she’s currently based.

Von Freyburg sees a parallel in the way Rococo has also been seen as frivolous, superficial and decorative. Yet she also views its highly stylised depiction of women as problematic. So she makes fun of this aspect by fragmenting the portrait with overindulgent use of textiles, creating something bordering on the grotesque. This serves also as a comment on our throwaway society and consumer excess.

Within her works, she includes fake Rococo tapestries of romantic figures and landscapes made by machine in the ‘60s and ‘70s. Once again she’s alluding to the issue of low and high art, asking what is good taste and who decides it?

The tassles that hang below her works are all hand-dyed and again have layers of meaning. Not only do they reference woven tapestries but also “pretty, flirtatious, cheeky dresses”. They also mimic the drips that are so common in contemporary painting. The brightly coloured synthetic material dotted through her pieces also have a modern take. She says, “They refer also to the culture we live in now – shiny clothes and handbags, pretending to be something we’re not.”

Pretending to be something we’re not is very much the theme of British mixed media artist Nigel Grimmer’s work. In Skin Deep he concentrates on photography, in particular the images used in social media such as for profile photos and nude pictures on dating apps, all designed to promote a false, constructed version of oneself that is, at its worst, exploitative.

In general, he describes his practice as a reaction against photographic history which he believes excludes “anyone who didn’t fit into that straight white male canon of photography”.

He uses the metaphor of the family album. “Anyone not posing as if they’re on the cover of a holiday brochure gets put at the back of the album and not stuck in.” It’s those not stuck in with whom he is most interested.

Grimmer discovered talking to his students that the young have dispensed with family albums anyway. They’re now all online. This has only widened the scope for photographic constructed illusion.

In Skin Deep, Grimmer combines male portrait photography with textiles as a way to draw attention to the superficiality he sees in modern digital photography and to connect the real and the digital world of the image.

The circles in the picture above, represent the idea of editing and self-censorship. He’s alluding to the way in which natural portraits are manipulated to promote an artificial image. The real knitted belt that drapes over the photograph also provides perspective and an illusion of space.

For, as Grimmer puts it, “In the last 10 years, all of the technology has been in our phones and it’s all about destroying that illusion. You put a menu or an emoji or a scribble on it, nothing is valued more than something else. Everything is completely flat.” Hence the scribble in the “anti-portrait” above that interrupts the image and challenges the viewer.

He does the same thing with dots, emojis and other examples of digital paraphernalia that are common on social media. He even includes a clever, distorted portrait of a man who has been swiped right and swiped up, a reference to the procedure on dating apps.

There’s nothing too subtle about Grimmer’s works echoing the notion that when it comes to digital self-promotion, subtlety is a somewhat scarce commodity.

Skin Deep is showing at the James Freeman Gallery until 5 June.