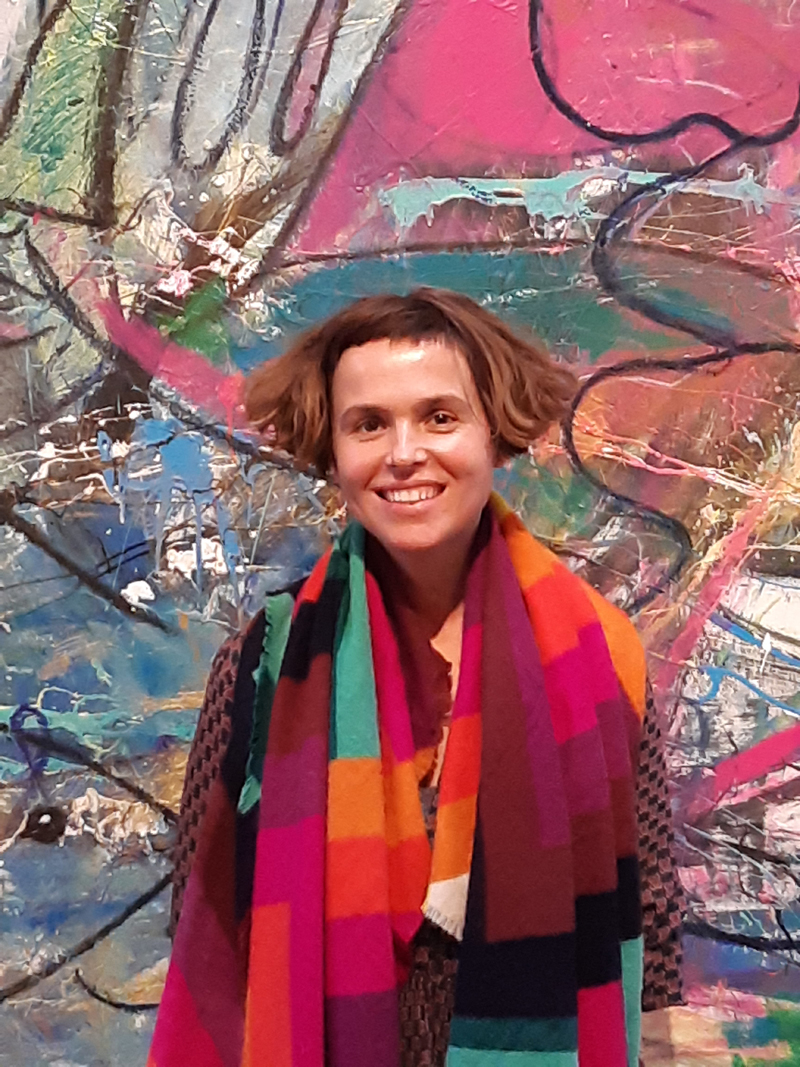 Every picture tells a story goes the saying. For Georgian artist Toma Stenko, narrative abounds in her paintings, driven by colour and figurative symbols. Her first London solo exhibition, as the title says, is about love in all its guises, seen from a female perspective. It’s not all sweetness and light since her works are intensely autobiographical, reflecting a fascinating but troubled childhood.

It’s a two-week pop-up show organised by Katrine Levin Galleries, a destination not a place. The venue alone is worth a visit. The show occupies two floors of the Elms Lester Painting Rooms in a Grade 1 listed building just off London’s Tottenham Court Road. It was where theatre stage sets were once painted and the pulleys that would lift and lower them are still in working order.

In large-scale works spanning a four-year period, Stenko uses colour to capture her feelings. She describes her method as intuitive, continually juxtaposing different hues together to find new ways of expression. She uses mainly oils but also pastel. In the image above, the overlaid silhouette of the mother and child symbolises not only the maternal instinct but the complex forces that exist between mother and child. The child wears an anxious look. There’s a personal angle here.

Her own mother “wasn’t ready”, as Stenko puts it, to raise a child when she was born. So she was brought up by her aunt, her mother’s sister who was desperate for children but couldn’t have any of her own. Then, when Stenko was 12, her mother, whom she barely knew, “kidnapped” her and took her to live in Russia.

The empty chair seen in several of the works has various layers of meaning. Specifically, it is a symbol of an absent father. Stenko lost her father when she was very young. “I still miss my father,” she tells me. “As time goes on I feel I need him more and more. He’s not here but still in my mind, in my life, in my creation.” The chair could also signify silence or things unsaid like the elephant in the room.

The complex feelings between a surrogate mother, seen here with eyes closed in the centre, her child and the biological mother on the left, are therefore born of personal experience but given a universal resonance. The father remains outside the emotional triangle.

Stenko attributes her unstable upbringing as the impetus for her creativity. This has found expression in more than one field. After art school in Moscow, she studied journalism and then came to London to study fashion at Central St Martin’s. Under the tutelage of designer Louise Wilson, who also taught Alexander McQueen and Stella McCartney, she won eight fashion shows around the world. She made stage costumes for the English National Ballet.

More recently, she has turned to film directing. Her latest short film, made in Russian, will be shown at the London Film Festival in the summer. Yet painting is something she has continued to do since childhood. “I was troubled and painting was therapy,“ she says. While in London, she spent many a day at the city’s major galleries absorbing the influences of such as Matisse, Watteau, Breughel, Bosch and, above all, Picasso.

“I love Picasso,” she says in a swooning kind of way. “If I had had to cheat on my husband with anyone it would have been Picasso,” she says smiling. The hand of the Spanish maestro is everywhere in her work. Not only is it in the Cubist-like eyes and exaggerated limbs as in A Family Portrait above, but also in the sensuous curves and the exaggerated sexual organs that feature in many of the nudes on show here.

Stenko has given visual expression to many of the nuances that comprise familial relationships. There might be jealousy aroused by a mother torn between competing forces such as a husband and son. It might be the guilt felt by a daughter anxious to break free of a domineering mother. It might be about the fickleness of love or the man who over-analyses his thoughts as a mask for not risking commitment.

Her favourite painting, made this year, sees a giant hand, a recurring motif, placed over the young man’s face. He is stifling himself. He has all these passionate feelings racing in his mind but doesn’t have the words to express it. Thoughts, represented by the vibrancy of the background, are exploding in his head.

How Love Feels is a sprawling show, often repetitive, with works that are sometimes a little too cluttered. Yet these are paintings from the heart with plenty of nuance and undoubted technical ability. Together, this makes them a powerful series of works.