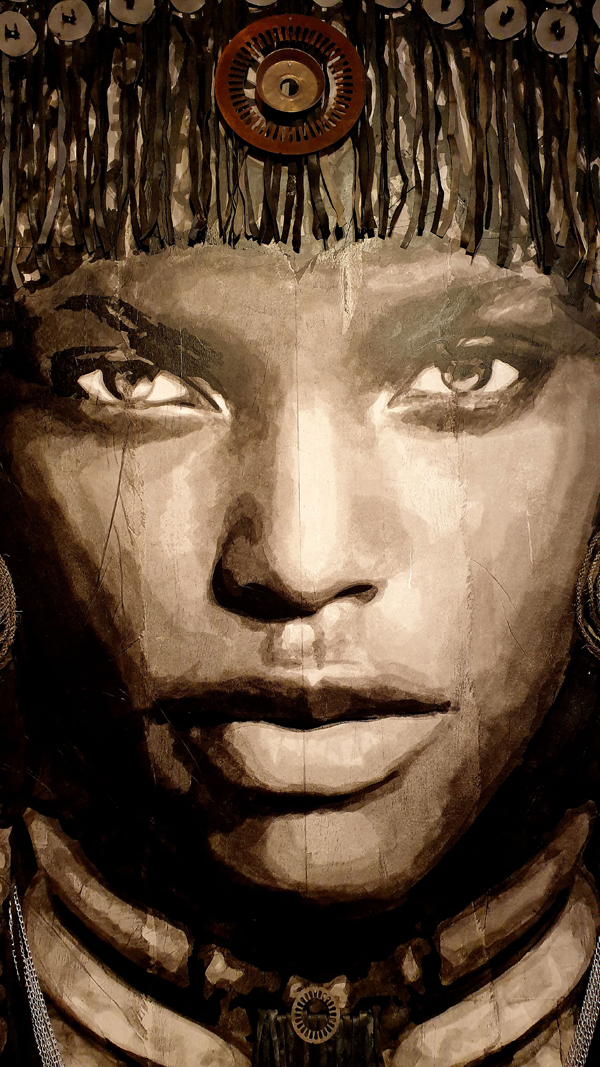 When you walk into a gallery, particularly one in Mayfair, you don’t expect to see such a hive of activity with paint being dripped, sets hammered, installations constructed, in other words a gallery being used as a working studio. For this is what is happening to the Lazinc Gallery for the coming weeks where some 25 contemporary urban artists from around the world will be transforming the place and offering the chance for visitors to watch the process of art in the making.

The idea came from Magda Danysz, an effervescent French curator who organised the same thing six years ago when Paris’s famous nightclub Les Bains Douches was transformed into an artistic space. Danysz, who has galleries in Paris and Shanghai as well as London and has written several books on art, gave me a tour around the gallery and talked about the project and how she sees the creative process as being as important to the viewer as the end result.

“We are getting more and more used to this sacred white cube where we put the artwork in the middle of the beautiful, white wall whereas when the artist is creating, it’s not necessarily what they had in mind. So the idea is we transform space, so we’ve covered it with wood from floor to ceiling… and the idea is that the artists will come and really fill the space in little by little. On average we’ll have two artists per week, so people can come and see the process and also we invite people to come back. So every two or three weeks will be a good moment to come back when it will be completely different.”

In the gallery’s first room, to the left is a man crossing a fence made from wire by two Iranian artists named IVY and SOT which alludes to the migrant crisis affecting so many parts of the world. The central wall features portraits by a Portuguese street artist who goes by the name of Vhils. The portraits comprise remnants of used posters and flyers glued to layers of billboard. Originally a graffiti artist, Vhils’s portraits can be found on many buildings in his native Portugal and beyond for which he scratches the surface of walls with a hammer drill, even explosives.

“What I love about the layers of billboards is that sometimes you have a movie, a date or something and you realise you’re going back in time to a date that might be meaningful for you or someone else… It’s like going back in time and showing what our cities and our urban environment are carrying.”

1010 (pronounced tenten) is a Polish street artist now living in Hamburg who specialises in graphic illusion. He was the first artist Danysz signed up. His murals, with their signature colourful rings, are to be seen in many European countries. The picture on the left above is from a block of flats in Warsaw, the one on the right being here at Lazinc.

“With this trompe l’oeil there is something that sucks you in and I like how he redefines space in this illusion. I wanted the show to be at some point when people enter they will be like they’re losing balance and getting sucked in. And over there you have the man jumping the fence and in 10 days time we’ll have an artist who’s doing a whole work in thread. I want people to look at a work and have to think, to watch and to search. There will even be some artworks that are only maybe half an inch and they will have to look for them. It’s like a treasure hunt, an art treasure hunt.”

In the adjoining room, American artist Dan Lam, of Vietnamese heritage, was in the process of pouring paint mixed with resin on to one of her polyurethane foam sculptures which you then see her hanging from the window sill. The rewarding thing about watching artists at work is that you can engage with them and ask them about their process.

“Most of them already know each other, they’ve met at festivals and art shows, museum shows, so we want to create a dialogue, and someone even coming out of the blue would understand and feel it.”

On the opposite wall to where Dan Lam was working, hangs a striking portrait by Yseult Digan, a French urban artist known as YZ. Her work centres on questions of humanity and authenticity within our urban environment and the portrait above is part of a series she has made called Empresses. She attaches such things as bracelets, headbands and various items of bling to her paintings.

“She travels the world. She’s been to China and Africa looking for strong women who she photographs and then paints. The she adds what I call the ornaments either from the place she met the person or from where she’s doing the painting. It’s done on flock paper which she glues to the wall and then paints with Indian ink and then adds the other elements.”

After climbing the wonderfully elegant Georgian staircase to the upstairs room of the gallery, we are greeted by a balloon installation by Charles Petillon. Some might remember four years ago how this artist covered the arched ceiling of Covent Garden with 100,000 pristine white balloons, giving the space a dreamlike effect. At night, flashing lights produce a heartbeat effect.

On either side are paintings by the Miaz Brothers of classical portraits that they have seemingly airbrushed. This Italian duo use spray paint to create the blurred effect and take the emphasis away from the artists and instead to the imagination of the viewer. Magda Danysz told me what she hopes visitors to this immersive exhibition will take from this and the other exhibits.

“That they get to really respect and appreciate the process and the art for what it is for itself. Not for its value, we’ve been talking this week a lot about the market. They shouldn’t be overlapping that much and some things are meant not to be sold and then there’s the question of how we make a living out of it. It shouldn’t be the first question. I love to give artists a voice and that’s what I think is most important.”

Watch This Space will be showing at Lazinc Gallery, 29 Sackville Street, London W1S 3DX until 21 December 2019