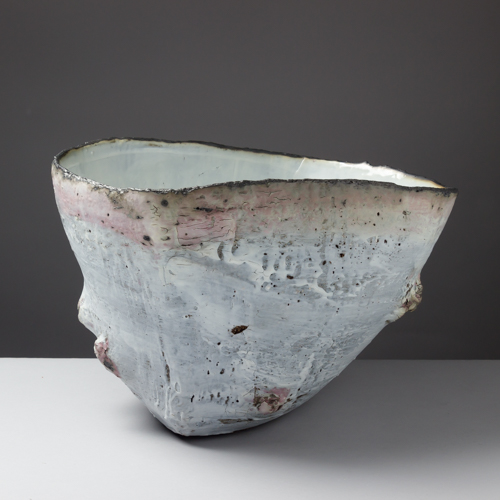 “I like the clay to speak for itself”, says ceramicist Margaret Curtis, speaking to me at the launch of her new exhibition, Surface, at the Contemporary Ceramics Centre in London. Her pieces, whether they be large vases and cylinders or small bottles and cups, have one thing in common – their imperfection. “I make them in the round, sort of precise, then I start pushing them and poking them and distorting them and let the movement of the clay give a lot of feeling.”

Shape is important to Curtis. The vessel you see at the top, Matt altered bowl, is a particular favourite. “I just pushed it and it went into this shape and I thought, yes I’ll keep that.” Most of her efforts she doesn’t keep. She has to be in a relaxed frame of mind and everything has to come together to make it work. “It’s my job as an artist to discard what I don’t want”, she says. Balance and harmony are her watchwords.

Curtis works from her studio in a remote farmhouse in County Durham that she shares with her husband and fellow ceramicist, Eddie Curtis. Art runs in the family. Their daughter Layla Curtis is a well-known artist in her own right and was the youngest person to have had an artwork accepted by the Tate Modern.

In fact, it was Layla who, indirectly, changed the course of her mother’s career. She was on an arts residency in Hagi, Japan 20 years ago and, on a visit, introduced her mother to Miwa Kyusetsu XI, honoured by his country as a Living National Treasure for his contribution to ceramics and his revival of ancient traditions. In his studio, Margaret was struck by the beauty of his tea bowls (chawans), sake cups, shino bottles and the like. They were made from a black clay that she hadn’t previously encountered.

When she got home she set about finding a black clay that would suit her way of working. She came up with one that was not only dark but gritty in texture and has used it ever since, mixing it up herself. It contrasts well with the white, almost snow-like, glazes she often uses.

Many of her pieces in this show are directly influenced by Japanese ceramics. There are sake cups, tea bowls, shino bottles of all different shapes and sizes. All, bar a few plates, are thrown on the wheel and are covered predominantly with celadon glaze that’s both shiny and flexible and also contrasts well with the white shino glazes.

She has also developed a variety of textures for her pieces using different consistencies of slip which she applies with a brush. Some pieces bear fractured porcelain slips. It’s not just the ceramics but the whole ethos of Japanese culture that has fascinated Margaret Curtis. “I’m influenced by how they think about nature and beauty, the decaying aspect of it.”

You can see these influences in the colours and textures on her pieces, sometimes appearing like rock sediments with mineral deposits or where moss or weeds have attached themselves, all very natural.

Curtis insists that her conversion from making functional ware to crafting ceramic sculptures, though influenced by the Japanese experience, was not entirely due to it. “When I was making round pots, I still in my head liked the idea of sometimes making them wobble a little. It’s always been with me in my head. I don’t think I suddenly changed.” Using porcelain clay did produce misshapen pieces but didn’t lend itself to the same kind of manipulation she gets today with her black clay.

There are more than 70 pieces on show (and for sale). This year alone has seen her exhibiting in the US, in several parts of Germany as well as all around Britain. “I’m very much enjoying making at the moment and I’m looking forward to getting back into the studio to make more work. I still think I have a lot more to give and a lot more to do. It’s a nice feeling.”