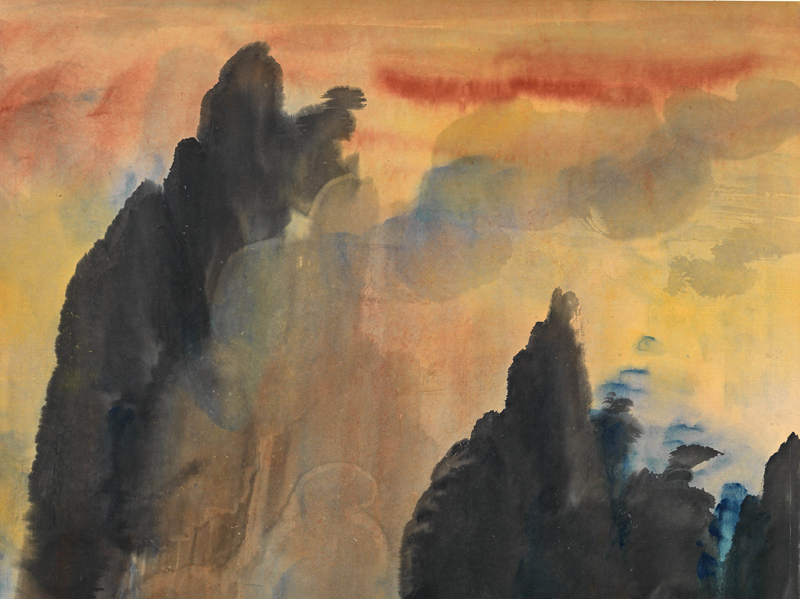 “When you paint, you should feel empty and calm and the painting will come out automatically, full of energy, full of life.” So says 64-year-old Chinese artist Mao Jianhua whose first UK exhibition, The Spirit of the Valley has opened at London’s Saatchi Gallery.

The exhibition comprises a series of 48 landscapes in ink on paper rooted very much in the ancient Chinese tradition of Shan Shui. They reflect the  philosophy of universal harmony and immortality.

Taoism has shaped Mao’s artistic practice and his whole way of life come to that. He only became an artist 12 or so years ago after a successful career as a businessman and entrepreneur in the leather goods industry. He began studying the ancient art of calligraphy. It seems extraordinary to westerners that to research the cultural and spiritual source of that artistic tradition requires learning such disciplines as martial arts, chess, music, literature and to spend time in isolation and meditation in mountainous regions.

Indeed, it is the Yellow Mountain range in eastern China that has been the primary inspiration behind the show. This area of outstanding natural beauty has been a mecca for Chinese landscape artists for centuries. The area abounds with dramatic sunrises and sunsets and hosts all four seasons – snow and ice in winter, an abundance of flowers in spring and summer, and with all the subtle hues of autumn. It harbours too interesting cloud formations – “sea clouds” Mao calls them. His skies are evocative, sometimes boiling with emotion, at other times placid.

Later, Mao began imitating some of the great traditional painters of the Shan Shui tradition from the Song, Yuan and Xing dynasties, gradually developing his own style. Each painting – and they are all on the same theme but vary in size – includes Mirage in its title. There’s a certain mysticism about them, a dreamlike quality consistent with the optical illusion implicit in the title.

These are escapist paintings full of peace and harmony, rhythm and balance, an escape from the brutality of daily life. Mao is only too aware of the great changes in modern Chinese society that have seen nature often decimated in the name of industrial progress and a decline in cultural traditions. The title of the exhibition is derived from a phrase of verse from Chinese philosopher, Lao Tzu, which draws parallels between the mystery of the creative process and that of nature. In Taoism there’s the belief that the universe follows an inherent harmony, regardless of human presence.

Mao uses Xuan paper for his works. This is specially hand-made and derived from the sandalwood tree. It’s more absorbent and gives more clarity and flexibility. It’s not too forgiving and if he makes mistakes, he says he will put the painting away, return to it later and create something quite different. His paintings are all produced in his studio after a stay in the Yellow Mountains. There’s an evident spontaneity about his style. He tells me he uses his brush like a knife in the manner of calligraphy.

This gives his works their energy as well as a certain weightlessness. As Italian art historian and the curator of the exhibition Martina Mazzotta notes, “the viewer should feel the dynamic of the creative process while observing the painting”. This is in the same way as you might with abstract artists like Jackson Pollock and abstract expressionists. There’s another similarity with western art history. One of Mao’s paintings is left completely blank and untouched, designed to mirror the infinite state of Wu Chi, the stillness, nothingness, the beginning.

As Mazzotta points out, it was Wassily Kandinsky who described the colour white as a phenomenon that “affects our psyche like a great silence, a silence not dead but full of possibilities”. Later, the musician and artist John Cage recorded his famous (or infamous) 4’33” that was completely silent in order to liberate the listener from unnecessary sounds. Cage, influenced by Taoism, was also inspired by the white canvases of Robert Rauschenberg.

In some of the works here, Mao has added colour and splashes of paint in a way that brings some of his works such as Mirage 12, above, close to abstraction, something that is uncommon in Chinese art and which gives Mao a distinctively modern twist.

So, despite two cultures existing separately, there’s a certain parallel with western traditions evident here. Indeed, one could see JMW Turner in many of Mao’s skies, an artist of whom he had no prior knowledge. Spirit of the Valley has many layers of interest both within and without the paintings themselves.

Spirit of the Valley is showing at the Saatchi Gallery until 7 July 2019.

All images are ©Mao Jianhua and courtesy of the gallery.