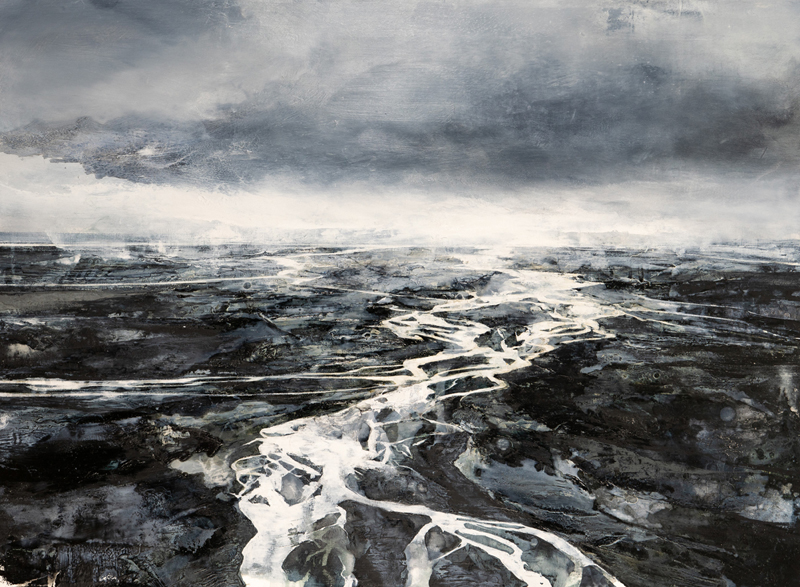 British artist Mark Thompson has acquired international acclaim for his bleak, barren landscapes, with their empty buildings, cavernous hallways and panoramic snowscapes. Created painstakingly with layer upon layer of oil paint and glaze on wood, they create a hint of a scene or place, charged with memory that is hazy and imprecise. Based in Sweden, Thompson brings to fine art that Nordic-noir aesthetic that we see so often these days on our TVs. His new solo exhibition at Proud Central in London comes 20 years after he first showed there. I spoke to him at the gallery and asked him first to explain the exhibition’s title, The World Distilled.

The way we absorb the world is fragmentary. We’re absorbing all the time but we don’t know what’s going to stick. I’m finding things now in the world that relate to my earliest experience of landscape, for example, that I didn’t know were in there. Memories are nor real. We reconstruct a memory in our heads and distill it sometimes in how we want it to be rather than how it actually is.  But that’s one of those things that make us truly human.

When you distill these memories, they’re notably devoid of people, they’re fairly bleak, and the buildings derelict. What does that say about you?

I look at the paintings like those early photographs. I think it was Daguerre who took a photograph from a Paris balcony with not a single person on the street. When asked about it he said that the shutter was open for so long that the people didn’t register. Painting’s a bit like that. It takes so long that fixing people in it would sit it to a point. I’d rather the time was stretched.

If it’s stretched, then you’re talking about an emotion, a mood, that sort of thing.

Absolutely. Instead of having it wishy-washy and vague, I’m still very interested in that sense of actual place, the intricacies of memory. Just because we don’t fix the whole thing, we can still fix on certain parts. It’s like our own sight. I’m seeing see you but I can still see the room. But the room isn’t clear, but it’s like memory of it fills in the gap.

Why the bleakness though?

You could say it’s tonal rather than bleak.

Are we the things that we paint? I’m not sure. We live in a time of a cult of happiness. Life isn’t necessarily like that. One of the first places was Iceland in 1997 and I took some colour film with me but I might as well have not bothered. Every photograph came out as if it was black and white.  Also I wonder whether we see melancholy or a lack of thrill maybe, or that kind of zing of neon, for example, as a deficiency. I think they work perfectly well without it.

In this picture, For Rivers to Run Through the Wood and Concrete of Floors, you have a river flowing through a derelict building. What’s the idea behind that?

This building is one of the few that is a real place. One of my last shows was in Stuttgart in Germany and I was approached by a man who saw my work in the show and said, “Was that my building?” I said, “Not that I’m aware of.” He said, “My God, I own a building just outside of Stuttgart that looks so much like the one you’ve painted.” He sent me a photograph.

Had you seen it?

No. It was like an image I’d had in the back of my head. It seemed inevitable that I was going to make a painting about it. So this is as close as I get to rendering something that’s real. It’s like this brinkmanship between paint and place, reality and process. They’re paintings, they’re paintings of paint. That’s important for me, very important.

And what about the river?

In some ways that’s part of the practice. Once I’d decided that the puddle was going to be there, the process of painting required hinting at that edge or a different edge. Sometimes the process tells you where you’re going to go with it. If I’m rigid and I stand in the way, that’s a bit deliberately difficult.

If your imagination is taking you to places you hadn’t envisaged when you started, does that require a lot of reworking?

Oh yes. No matter how clean they get in the end, and I don’t think they’re particularly clean, they go through stages of extraordinary ugliness. There’s sacrifice and loss all the way through the process. I think in some ways that’s where the melancholy comes in. Each day I pick the work up off the floor, put it on the wall and redraw. At the end of the day, I take it off, put it flat and, effectively, destroy it. Partially anyway, creative destruction. On the following day, pick it back up and re-engage. It’s like I have to give myself something to do. If I’m not reacting to something, to get it better, to get it perfect, then I’ll end up painting the same painting over and over and over again.

I can’t say. As every British child I went to stately homes as a kid and that has to have come in somewhere. When I started travelling, I was on my own and even though I was going to look at landscapes, I ended up gravitating towards cities and experiencing architecture alone. No matter how we want to portray ourselves otherwise, we’re not party people. We’re a little bit solitary most of the time, we spend most of our time in the studio doing this and our travelling experiences are generally quite similar. We’re going to try to understand something.

What are you trying to understand?

Myself, in relation to the world. This set of interiors are about our nobler instincts. These are places we leave behind us. This is our best rendering of ourselves in stone. It’s primal almost. This is the halls of Vikings, this is what we arrived at and that’s somehow important.

So human figures don’t appear in your paintings but humanity is there.

Well, you’re looking at it. You’re in it. It’s one foot in the gallery, one foot in the painting. They’re mirrors in that sense. Also, if I put one person in it, it would be a portrait, two people would be a narrative, then it would be about the people. I’m not interested in those kinds of relationship in the work because it holds you to time.

All images are courtesy of the artist and gallery