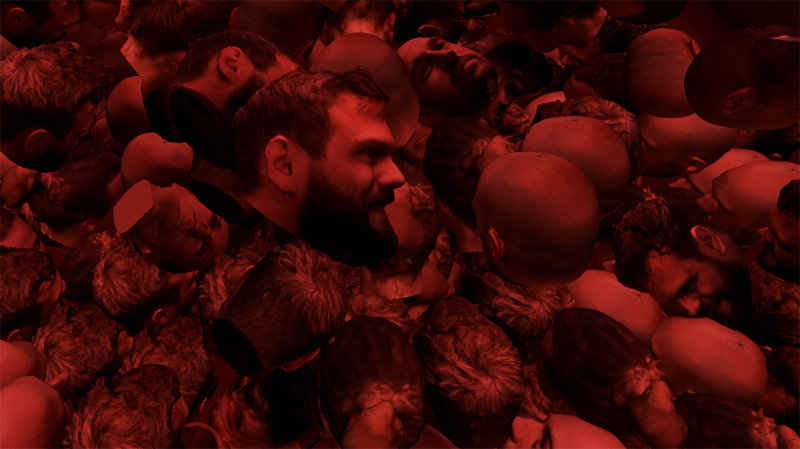 London’s Gazelli Art House is currently hosting the third in a series of Virtual Reality art exhibitions, entitled Through the Headset 3 in which three artists/artistic groups are showing their different explorations of the media.

New Jerusalem is based on the heavenly city that is created after the apocalypse described in the Book of Revelation. Michael Takeo Magruder has developed his artistic representation of the concept by bringing it into the modern computer age. What you see on donning the VR headset is an immersion into what look like vast rays of light, gold and white, stretching all around you as a fantastical metropolis. Patterns emerge through them and there’s a continuous celestial soundscape to enhance the heavenly notion.

Part of a former project called Decoding the Apocalypse, Magruder has taken the relevant text of the Biblical work in which it describes the architecture of the prophesised city and has translated it into data code.. He has then extruded that into three-dimensions to achieve the structure. “In a short, poetic way, what you’re looking at is the word of the text,” he tells me. “The word of God makes the city.”

That makes up the geometry but to create texture, he captured data from Google maps of the current city of Jerusalem and its suburbs, and translated that into the patterns you see in virtual. To accompany the singular immersive experience of the headset user, Magruder also projects a limited version of his work on to a screen. He believes Virtual Reality is part of an artistic continuum that stretches back thousands of years.

“If we look back in antiquity, Roman fresco wall paintings would be art for the time. Look even further back to the cave paintings at Lascaux. That I would argue, and many academics have argued, that that is VR too because you have this projected mental space, it’s a communal space, it’s cinegraphic, it’s formative, it’s multi-sensory, so in this installation I’ve tried to embrace all those notions as well.”

A very different experience is The Sleep of Reason Still Produces Monsters, a work by London-based design studio Mbrionic in collaboration with Spanish visual artist Xavi Sole.  It’s set in the Turbine Hall of the Tate Modern and its theme is based on three of Goya’s so-called Black Paintings in which, over three decades, a joyful vision of bourgeois Madrid society turns into something dark and scary. You get a non-immersive taste of it on the video here

So, a playful scene in which a number of disembodied heads bounce merrily around the museum like footballs gradually starts to become unsettling when the heads begin exploding bloodily and confront the viewer aggressively. On one level, it’s both fun and discomforting. Mbrionic’s Tom Szirtes tells me of a deeper meaning behind it. “I want to question what is the purpose of a gallery. When you put a piece of artwork in a gallery it becomes special but if I can recreate a digital version of the Turbine Hall then what importance does that give to the art? It’s also a question of what sort of art should be in virtual galleries? Has the gallery space informed the artwork?

Xavi Sole also draws parallels between the social upheavals that Goya expressed in the 30-year span between his first and last Black Paintings, and our society today. “It was the time of the Enlightenment after which Europe and Spain in this case embraced a new world based on reason and education and culture and knowledge. Something happened that started making people get rid of these values and embracing superstition, idols and unreasonable situations. People began accepting things that they did not accept 30 years ago and currently we see that our society seemed to have a fantastic future at the end of the 20th century but in the 21st century it’s starting to turn into something else and making the same mistakes of the past.”

Mbrionic also feature a short film called Sunfollowers set in a field of sunflowers with a sun getting hotter and hotter until the flowers are burnt almost to a crisp. The political reference is obvious but by placing the viewer in the field with some interactive capacity, the question is asked as to who or what is the main influencer here.

Also exhibited is a VR work by CIRCA69 The Third Day. Unfortunately, it suffered technical problems when I tried to view it.

VR has just about got through the novelty stage that all new art goes experiences. This means that there’s a kind of semi-rule book about what you should and should not do. Mbrionic are already pushing those boundaries a little. For example, there was a short section of their Sleep of Reason piece which made me feel a little nauseous. That was a deliberate ploy, I discovered, to enhance the discomforting atmosphere. Mmmm.

I asked Tom Szirtes of Mbrionic in which direction he thinks Virtual Reality art is headed. His answer shows how many questions are still unanswered. “I think that so few artists are working in VR that we barely know what makes a good VR experience yet. Is it a long form or a short form, is it passive, should it be interactive? Is it something that should ape reality, should it be completely abstract?  I’m hoping that a lot more people start to explore this medium and create something that uses its power to evoke an emotional involvement in the user.“

Through the Headset 3 is showing at Gazelli Art House, 39 Dover Street, London W1S 4NN until 23 September 2018.

The images are courtesy of the artists and gallery.