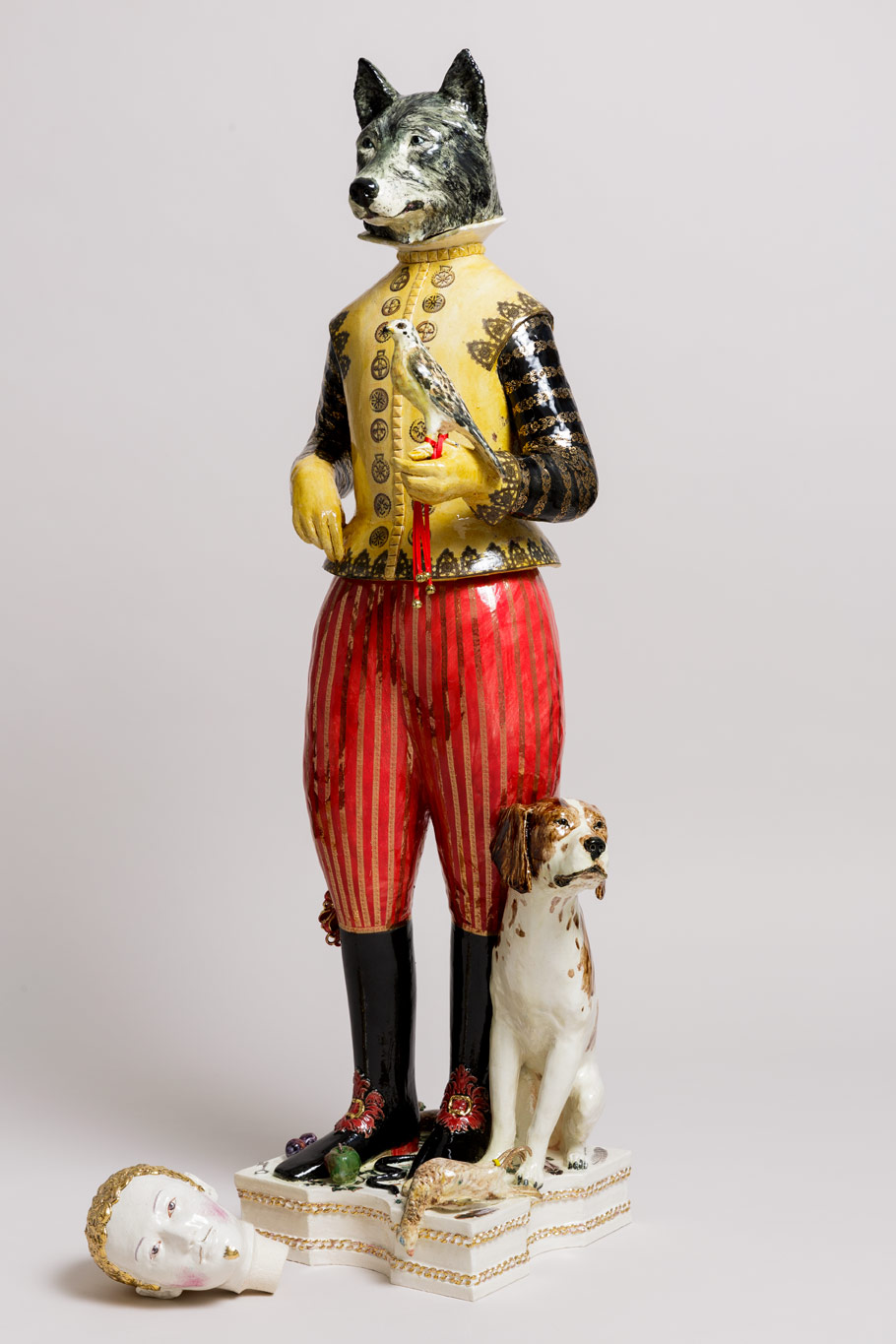 In keeping with his focus on artists who confront current themes by referencing art history, gallery owner James Freeman has invited five European artists to show work for his latest exhibition who take their inspiration from the political and social upheavals of the Early Modern period from the 1500s onwards.

For example, ceramicist Claire Partington’s Alpha (top image) is a beautifully constructed figure of a courtier, out falconing with his trusty dog. Yet his head is interchangeable with that of a wolf. It’s a reference to power relationships – subservience to those above, tyranny to those below – in a class-ridden society. The clothes are ill-matched and fantastical. Shire-horse badges, for example, decorate the enamel over the tunic’s glaze in the old tradition of appropriating and reinterpreting styles. The detail of the creatures and objects at the subject’s feet are exquisite.

Mixing styles and genres is a hallmark of the work of Greek artist Vasilis Avramidis. Elsewhere, above, on one side recalls the verdant, romantic landscape of the fêtes galantes opposite the intense light and dark shadows of the Baroque painters – kind of Watteau meets Caravaggio. He’s hinting here at the transitory nature of life and civilisations. It’s almost as if Avramidis is making up for lost time. He had no classical training and began by painting gestural, abstract impressionistic type of works. “Now I’m getting to the other side,” he says. “It’s very intriguing for me to slow down and to study the Old Masters and the history of painting.”

The heads in his figures are either incomplete or absent. “The head is so engaging and the centre of focus that you can miss the rest of the painting…I don’t want a certain genre to be dominant.”

Yet Avramidis’s works are not always harking back to the past. He uses blurred backgrounds in the way photographers use depth of field to accentuate their subject. The white line you see in Elsewhere was to solve a certain compositional problem. “Somehow it needed this in order to stand.”

Olivia Kemp’s extraordinary detailed flights of fancy exemplified in Ascending the High Pass is part of a “strange world” series in which she travels somewhere, takes images from it and extrapolates them into a heightened version of where she has been. She chose Bavaria on this occasion after watching a TV programme about medieval castles. This ink on paper work took her five months to complete, working all day, six days a week. “I use a slightly weird bird’s eye perspective and I know I can get as many buildings as possible in this way rather than having a flatter viewpoint,” she tells me.

There’s humour there too. The funicular railway that threads its way around the dreamscape was inspired by the Grand Budapest Hotel film of Wes Anderson. Another image is taken from the opening credits of The Sound of Music. Her monumental works (there are two in this show) have been compared to those of Escher, but as she points out, “Escher’s works sort of make sense, mine don’t make sense at all.”

Daniel Hosego’s ink drawings are a kind of melting pot of cultural references from both art and literature to which he adds his own spin. “A lot of my work stems from the idea of post-religion and without the moral compass of religion where we get our values from and what makes something important. I think that this is very relevant at the moment and we’re trying to solve these questions as a society,” he says.

A big influence is Albrecht Dürer and a reinterpretation of the German artists’s Adam and Eve has the protagonists as skeletons. There are echoes of Dürer’s Four Horsemen of the Apocalypse in In the Eye of the Storm along with a mixture of references from all and sundry. There’s a Hokusai-type wave ridden by horses from a Guinness advert. The two characters from Hemingway’s The Old Man and the Sea wrestle with the waves on the fishing boat while Mount Fuji has been transformed into a burning oil rig belching out smoke.

The pollution is not confined to the air. The seabed is littered with discarded plastic which ensnares a mermaid among other creatures. Once again, the values of our secular age are called into question. Hosego’s drawings are scaled up into screenprints on perspex in the manner of 20th century pop art. These are produced in series of five or six each with a different colour to keep their individuality. “I’m playing on that idea of high value and low value,” he tells me. “I position myself in the middle. A lot of art now has quite definitive positions whereas I feel like a lot of my opinions are castles built on sand and I’m trying to position my work in that grey area which is where I exist as a person I think.”

El Gato Chimney is an Italian who paints bizarre watercolours of rams going up a flight of steps with papers pinned to it in Harbinger and birds flying through threads and graphic signs. It’s difficult to extract a meaning from them which appears to be the point. He is hinting at symbols and codes whose meaning is now lost through the passage of time.

The 18 works on show are diverse yet bound by elements of fantasy influenced by the rich traditions of the past and reinterpreted for our modern age. Early Modern Matters runs at the James Freeman Gallery, 354 Upper Street, London N1 0PD until 29 September.