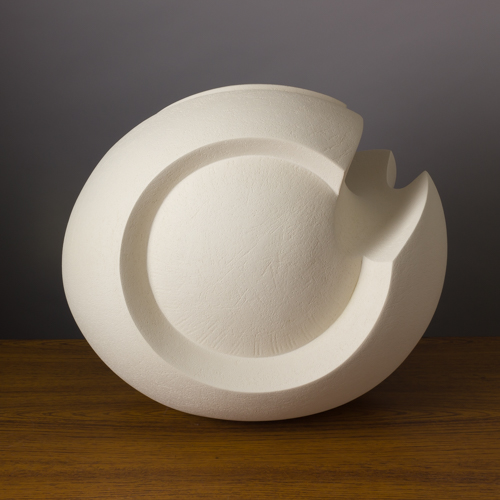 Like so much good art, ceramicist James Oughtibridge’s work only begins with a vague idea of what he wants to end up with. His sculptures grow and evolve from slabs of clay to round, curvaceous forms in which perspectives change and deceive around undulations, peaks and troughs defined by sometimes smooth, sometimes sharp edges. There are openings like blowholes, spheres resembling bubbles with a certain lightness enhanced by the interplay of light and shadow that contradicts the weight of the medium. 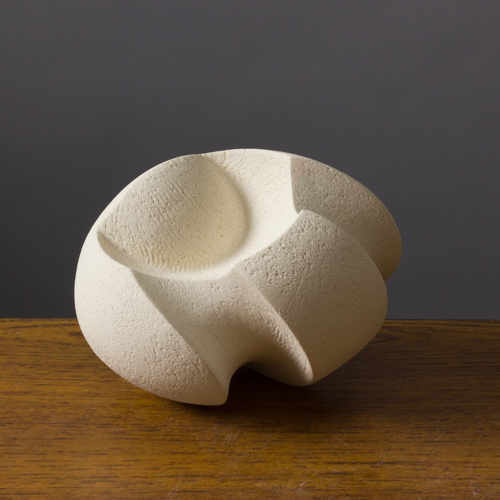 His modus operandi is to start off with a press-moulded bowl form and different size plaster formers. He lines the mould with clay, ending up with a bowl he can squash to make more elliptical. He then starts building up the sides with curved strips of clay to get more height and volume in the forms. With the resultant pod shape, he can start cutting pieces away, insert concave or convex sections or whatever he fancies. Then there follows hours of scraping, sanding and refining.

Several of his most recent pieces incorporate Ebb and Flow, the latest exhibition at The Contemporary Ceramics Centre in London. In keeping with the exhibition space, there’s no room for the large-scale sculptures that have made his name. The show, while it contains medium-sized works, is mainly about miniatures, sculptures you can hold in your hand yet contain all of the features of his larger pieces. 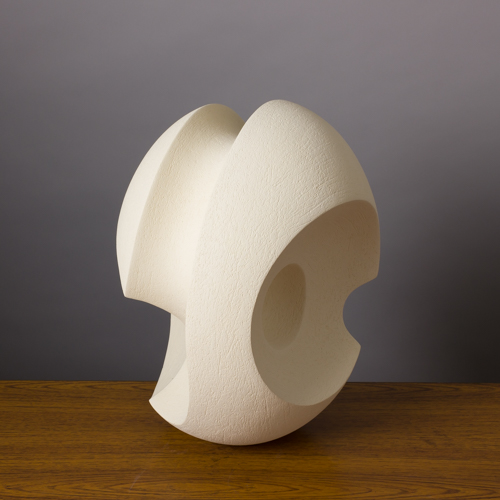 Oughtibridge calls them his “drawings”. Having dispensed with sketchbooks since college, for his enclosed works he always starts out with mini hand-held pieces. “Initially I saw them as maquettes but they’ve become more than that now. They are individual sculptures and they give me ideas for the bigger pieces but they don’t necessarily follow them as such,” he tells me.

While studying for his MA at the Royal Academy of Art, his tutors pushed him away from the refined, monumental sculptural form, taking him out of his comfort zone and challenging him to go back to basics. “They pretty much broke me down and I had to rebuild myself,“ he admits. But by his final year he went back to the big scale work he loved best, albeit with a new set of skills. He has carried out numerous private and public commissions around the country including the Presidential Suite at London’s Grosvenor Hotel. He even has a piece that will be seen in the next James Bond film, Spectre. 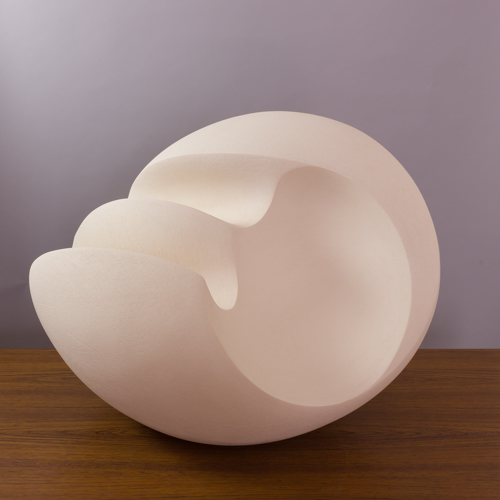 There’s a certain solidity to Oughtibridge’s work that reflects natural rock formations and landscapes from his native Yorkshire. The artist has also been influenced by the sculptor Tony Cragg, particularly his big, industrial sculptural forms. Yet there are other influences at work too including a discovery he made at the first year of Ceramic Art York.

“I was walking through the grounds at the back of the museum and came across the old abbey ruins where Ceramic Art York was being shown and nestling in the grass on the manicured lawns were these broken fragments of stone that had been carved with some of the ornate details showing through on them and I liked some of the undulations and scoops in them.”

Another inspiration comes from an unlikely source. “The husband of one of my biggest dealers in London is a classic car dealer and some of the lines on the bodywork of classic cars and the sharp edges and scoops have always been of interest.” 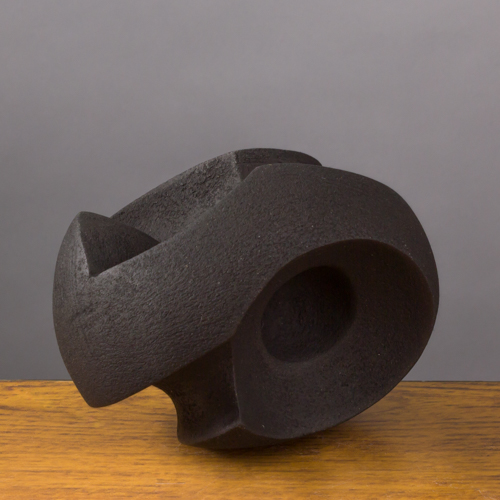 You can see too his fascination with old industrial machinery that first took hold while he was doing his first degree at Loughborough University particularly from the old railway museum there. This comes across particularly in his black pieces. Working in black began when he was commissioned by Valentine Clays in Stoke to make a piece using their black clay. He found it not as forgiving as white, so now, for his black sculptures, he mixes the two together.

A relatively new departure for James Oughtibridge is to work tool marks into the edges of the works to enhance a sense of movement and to give them a certain texture. It also makes them more tactile and whether large or small, the sculptures are striking in the way they seem to change when you look at them from different angles and in varying strengths of light.