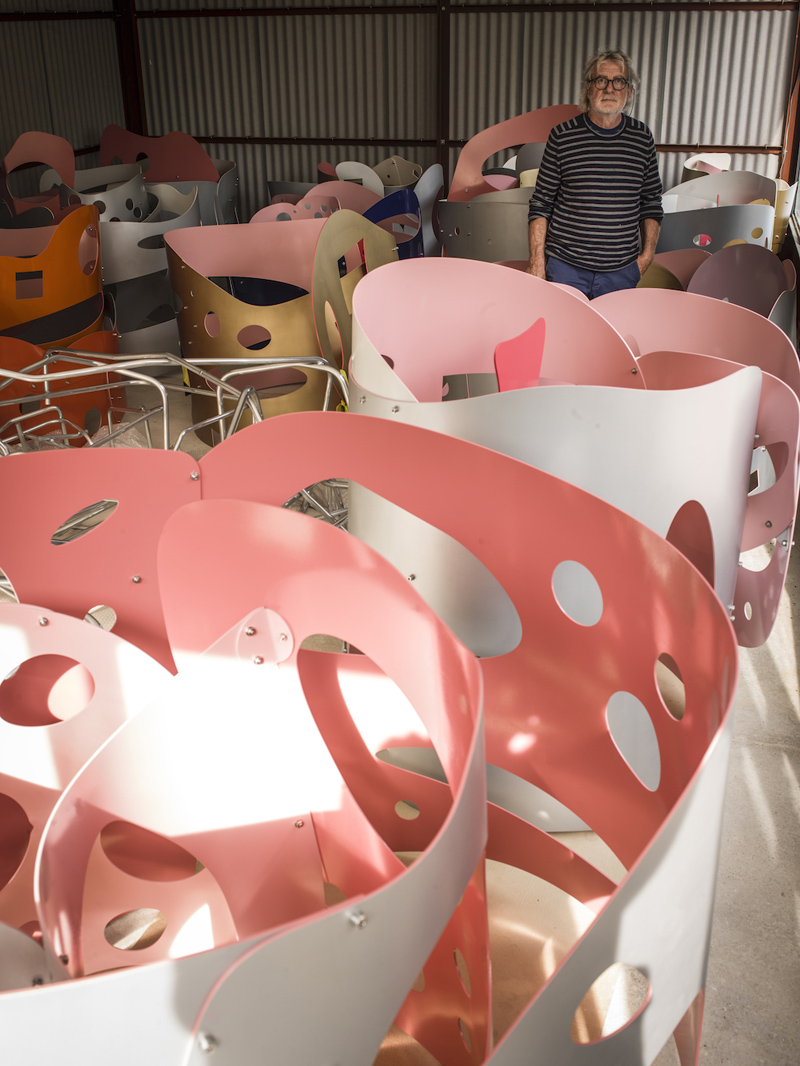 Jeff Lowe has been up there with the leading lights of British sculpture for decades. He secured his first solo exhibition in Cork Street while he was still a student at Central Saint Martins in the 1970s and has represented Britain at the Paris Biennale among many other achievements. His new exhibition at London’s Pangolin Gallery shows that his passion to innovate and test himself with new approaches and materials is as strong as ever.

For this show, Lowe has dispensed with the heavy metals such as iron and steel that you normally associate with his work, and turned to aluminium. He has taken thin, curved sheets of the metal and wrapped them around each other to create abstract circular structures. Whereas most sculptures are based around the external surface, Lowe has carved openings that he calls silhouettes into the sheets, in several different shapes, so you get to see the inside too.

The idea is that from a distance is that you get a certain image but as you get up close the visual experience changes as you look at the internal layers with different effects each viewpoint gives you. Hence the title In the Close Distance, though that effect is mitigated a bit from the sculptures being in the confines of a gallery. “I had to take into account many different relationships within the sculpture, internal and external and from one position to another,“ Lowe explains as he shows me around his works.

The result is an extraordinary sense of lightness and playfulness. The pieces could almost be made of paper – a kind of industrial origami. The use of bright colours adds to the freshness which is another marked change from previous works. He did use colour a lot back in the day but felt that colour was being overdone. But recent dabbling with woodblock printing made him think again, and colour also reinforces the idea that the sculptures are built from different sections akin to collage.

The nuts and bolts which he has left in as integral parts of the work have this same effect. Originally he clamped the various bits of metal together so that he could change things around as and when he saw fit. There’s a randomness here that is a feature of many artists’ work. Lowe made more than 20 of the sculptures within 15 months, the most prolific period of his career. The names are derived from a current obsession, Handel operas.

“One thing I definitely wanted to do was to make things directly as I could, to cut out as much of the actual processes which take up time. I felt that when I started with these, I had to continue it, there couldn’t be a break. That even comes across with the music. I had to put the same music on over and over again to keep the mood.” It works for Lowe but I’m told his assistant is quietly going bonkers.

Two and a half years ago, Jeff Lowe bought the Lime Works in Faversham, Kent, a former water purification plant built and designed in the 1930s on Art Deco modernist lines. He has refurbished it into both a home and studio. It comprises lots of rooms and passages that reveal different spaces from many positions and angles.

He believes that this most likely inspired his sculptures during the 4-5 months of contemplation while he worked on the house. The undulations and curves he has cut into the metal he credits to the influence of the rolling countryside visible from his windows.

Lowe has also included in his exhibition some jewellery and a number of screenprints he has made recently in collaboration with Kipp Gresham at the Print Studio in Cambridge. They’re all unique monoprints and follow a similar pattern of creating shapes and layers with that same element of accident and randomness.

On first seeing them I assumed they were designs for future sculptures but it turns out that this is not the case. He told me that he had just completed a sculpture that was influenced by a print. Pushing himself into learning new skills is one of the keys to his creativity and longevity as an artist. “I don’t want to make something just to make something. I actually want to learn through making. So I start out in the morning and if by the end of the day I don’t feel I’ve gained something, then there’s no point.”

In the Close Distance is showing at the Pangolin Gallery, King’s Place, 90 York Way, London N1 9AG until 22 February 2020.