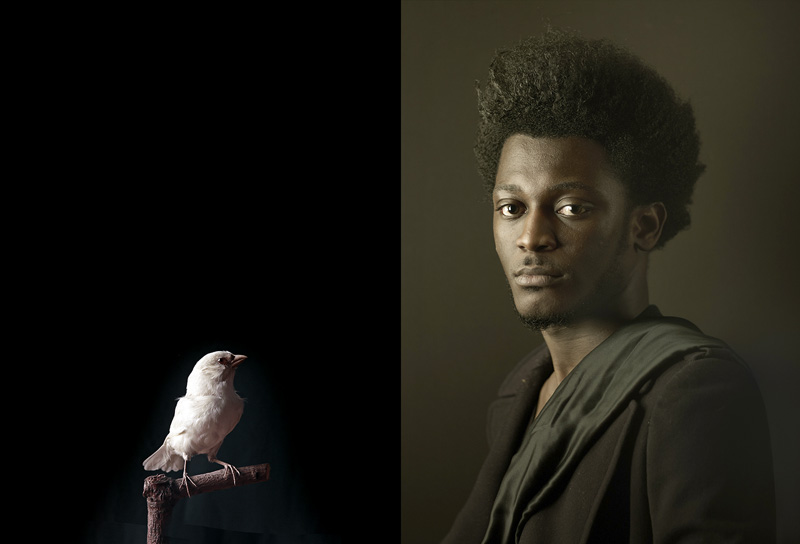 To look at they could almost be paintings – portraits made in the classical style of a Goya or a van Eyck. Indeed, French photographer Pierre Gonnord cites them as influences. “A portrait obliges you to have a kind of contemplation,” he says. His first solo exhibition in the UK, Nature Tales,  gives plenty to contemplate. Comprising seven diptychs, each human portrait is paired with that of an animal.

There are certain common denominators to Gonnord’s oeuvre. His subjects’ faces are always set against a dark background in order that they benefit from the contrast and retain sole focus. To enhance this, they look directly at the camera. They are always lit from the side, sometimes artificially, most often using daylight.

Then there is the choice of subject. In contrast to the classical portrait tradition of royals and aristocrats, Gonnord looks to the underprivileged, those on the margins of society who he says “are lost, collapsed by the system”. He often finds these people on the streets of cities around the world – the poor, the homeless, outsiders.

Sophie is a young girl he met in Atlanta. She’s a descendant of planters who once lived in a big house in the countryside before moving to the city after falling on hard times. There’s a certain self-confidence in her youthful eyes with a look of intelligence which reminded Gonnord of Anne Frank. “She made me feel like a very small guy in front of her and I wanted to express this,” he explains to me. “You can feel like she’s looking at you and observing you.”

Gonnord has included animals in this exhibition because he feels in some ways they are outsiders too. The fact that we can’t tell for certain what an animal is thinking or feeling creates for him an imbalance. We often, he feels, don’t respect the sophistication or the intelligence and complexity of the animal. “We place ourselves as humans on the top of the chain. Sometimes it’s good to go down and contemplate.” He came across this owl, Cassandra, (each animal has a name too) from a group of falconers. The “wise” owl complements Sophie’s perceived intelligence.

Picasso, the gypsy horse looks like it’s smiling at the camera in a cheeky kind of way. He could come straight out of a fable or a book like Animal Farm. Part of Gonnord’s skill is to capture the look and the attitude. It requires a lot more patience with animals than humans. At first too docile, Gonnord had to introduce a female horse to energise Picasso. On the right, Roland is a German street performer he discovered in Lisbon while working on a project for an institution there. Most of the photographer’s work, in fact, is made for institutions rather than galleries. The detail of the face is quite arresting, prompting thoughts about how his journey in life has ended up where it is.  “I’m very sensitive towards people who work on the street because they’re not protected. They try to sell their art but nobody pays attention.”

I wondered where his compassion for the underdog began. Born in France in 1963 as one of seven children, he says he didn’t share his mother’s faith but his parents “always had the door open” to people worse off than them.  He has travelled the world but has spent the last 20 years predominantly working in Spain. He was heavily influenced by Czech photographer Josef Koudelka whose photographs of gypsies and other outsider groups are world famous.

Like Roland, Leonardo has that wild, unkempt look accentuated by his threadbare sweater. Gonnord discovered and befriended this Dutchman in San Sebastian in the north of Spain where he was taking part in a Basque equivalent to the Highland Games. The beret is a prize he won for carrying and cutting stone. Arthur, the vulture, bears a similar air of wild savagery.

To earn the trust of his subjects, Gonnord spends time with them, showing them his work and trying to convince them of his sincerity. “Most are not interested,” he says. “On the other hand, when people ask me to do it, I do it because I want them to be happy. I give them the portraits and if they like them it makes me the happiest man in the world.”

Gonnord came across Elena in a Church in southern Italy. She has kind eyes, a weathered face and a neck that Modigliani would have been proud of. Max the crow, meanwhile, has a rather wistful look. There’s a poetry in this and the other works, a compassion in extending dignity to people who might not receive it from mainstream society and who would certainly not expect to have their portraits admired by viewers in a Mayfair gallery.

Gonnord has shown us in his very humane way the inner beauty of the human being, even those whose faces betray difficult lives and whom society has let down. They are still battling for survival both physically and against social norms. His subjects are timeless and with all his works, you get a feeling of the personality and their narrative but also of how fragile life can be for human beings, all of us.

All images are courtesy of the photographer and gallery.