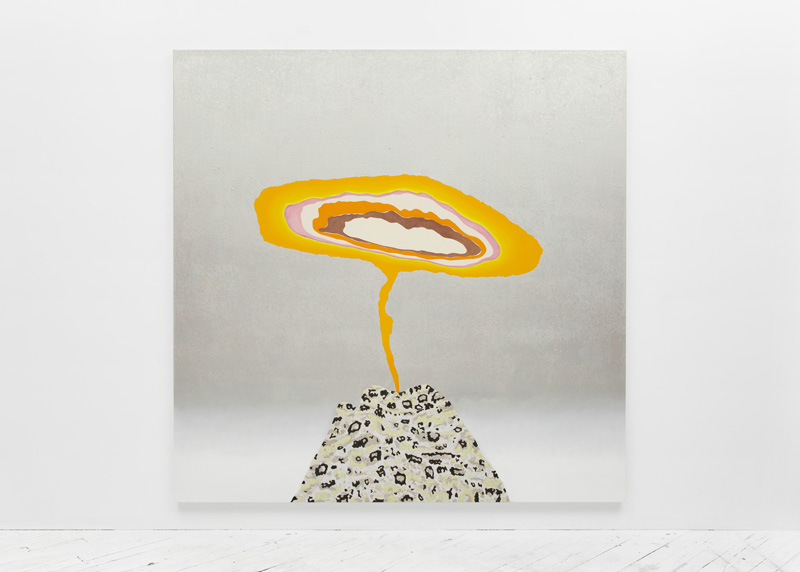 “Turn off your mind, relax and float downstream”, says artist William Monk recalling the words of John Lennon from the 1960s. The line serves almost as a piece of advice heralding his new exhibition, A Fool Through the Cloud, at London’s Pace Gallery.

For Monk’s oil paintings are difficult if not impossible to decipher.  Not even he would claim to be able to do so precisely. So go with the flow. That the paintings are largely figurative, yet highly cryptic, entices one to speculate nevertheless. “If you answer this riddle, you’ll never begin,” goes another ‘60s line.

So, the eponymous A Fool Through the Cloud (topshot), may outwardly resemble a cloud of ash risen from a volcano but could just as well be a symbol of enlightenment, revelation, spirituality, apocalypse or whatever. For the ‘cloud’, always containing a number of coloured rings, is a motif that recurs not only in many of the pictures in this show but one that populates his oeuvre in general. Monk says he is looking for something under the surface.

“Pushing something beyond where it’s logical, that’s where I want the paintings to go. A Fool Through the Cloud is part of my ongoing attempt to get through and beyond.”

Monk’s signature style, common to most of the dozen or so exhibits, is of open vistas, uncluttered and simple, with bright colours that echo the 1960s but without anything resembling psychedelia except perhaps conceptually – for that search for a higher state of consciousness, his “beyond”.

Two works on view entitled Within You and Without You, the Beatles again, could be straight out of a road movie, with a dark, open road reflected in a black sky and ended by a marmalade-coloured, sun-like obstruction. There’s no human presence and his paintings have been described as mindscapes, visualised fragments of subconscious thoughts and memory.

Like many artists in whatever medium, Monk plays out variations of the same theme through repetition. “The idea of painting as mantra interests me: paintings as objects, figuration as images and models, used as vibrations to reach somewhere else, beyond ourselves.”

In the centre of the exhibition space is a three-walled darkened interior that houses three paintings in the Sea of Cloud series of which the above is the third. The room reminded me of a chapel, giving off a sense of quiet reverence. Set as a kind of montage, the central cloud motif is seen rising above the sea in the first, hovering while still connected to the landscape in the second and then breaking free. The dark, rich blues of the sea and sky either side of the bright horizon bring to mind the work of photographer Ansell Adams but with an added electric charge.

The viewing experience is important for the artist. Each of these works comprises two adjoining panels with the seam placed at eye level so that the viewers will, the artist says, “feel they’re in the water looking up to the sky, across to the horizon and below to the depths”.

Monk acknowledges the cinematic influence of these paintings and has likened the room to a zoetrope, the old device containing images that when spun around create a semblance of animation.

Similarly, in style but not content, Zoetrope (The Divided Cell) can be seen in this way. It’s like peering through a set of French doors to trees outside. It’s more organic than the other pieces, though less intriguing.

In general, Monk’s paintings create an aesthetically pleasing world that exists somewhere between reality and fantasy in which the artist is searching for a higher meaning or perhaps a greater sense of self-knowledge.  The uncertainty gives his work a quality that is not only  enigmatic but also haunting.

A Fool Through the Cloud is showing at Pace Gallery, 6 Burlington Gardens, London W1S 3ET until 10 April

2 thoughts on “William Monk – A Fool Through the Cloud”