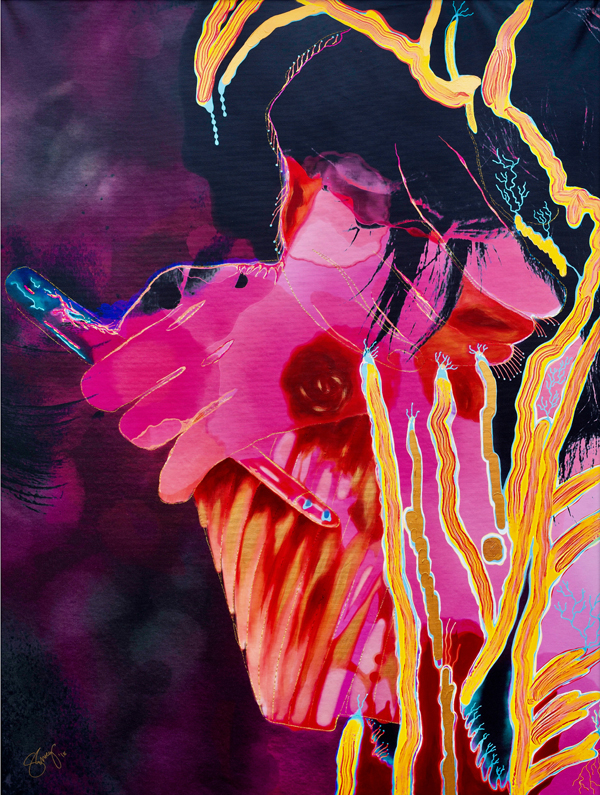 Multimedia contemporary artist Samantha Louise Emery has created a series of 10 portraits celebrating the women who have inspired her throughout her life. Entitled IKONA Mirrored Interior, they are currently on show (and on sale) at London’s Mediaworks.

Each portrait is brightly-coloured in semi-abstract form. The subject’s face isn’t obvious at first but becomes clearer as you take a close look. What is more clear is that the artist has included herself in each work, representing her connection with each subject.

I spoke to Samantha Emery about some of these women and how she has represented them in her works. Each portrait mixes four media – digital drawing, photo compositing, embroidery and painting. She explains more about the whole process here.

How much of an inspiration has your godmother Krystyne Griffiths been to you?

She has been instrumental on my sense of design and my sense as an artist because she’s an artist in her own right. She’s not a painter but she was the face of Yves Saint Laurent for decades across Canada. When she would come to visit me, she always brought me something and it was always blue as she knew it was my favourite colour. She’s seen me through some difficult decisions that I’ve made in life and she’s always been there as a support but doesn’t judge and sees me take my path and make my decisions. I can come back to her and she’s always straightforward and frank. I can’t hide anything from her. She knows straight away if there’s something bothering me.

In the picture, above, you have her in profile with you in the foetal position.

It’s about me baring my soul and being very vulnerable. It’s almost as if it’s an x-ray, as if you can see my bones. When I composited the photograph, I was able to get that texture. She’s looking at me in a very gentle way but that shows the woman that she is. She has so much compassion and a very deep understanding of human psychology and the emotions that are attached to that.

There’s something there that reminds me of a butterfly and she loves butterflies and then there are a lot of swirls and curves, all very feminine. I literally went into her creases and took chunks of her skin and brought them out. It’s all connected, weaving around me like a web, full of energy. I’m still making sense of my work. As I integrate it, I see more and more each time.

What have you learnt about yourself then in this process?

I think I have learnt that I have a much greater understanding than I ever gave myself credit, for the human psyche and the human spirit. I have an immediate instinctiveness about a person. I can pick up an esoteric sense about them, an energy. By having gone through this process, by getting inside the skin of each woman, without being with them, reminded me that that’s a quality I hold and I take that with responsibility. I put it out there without being fearful of what I sense about them.

Let’s turn to Alanis Obomsawin, why choose her?

I remember her as a little girl. She had this incredible and silent presence about her that had so much power but not in an intimidating way at all. She had an intriguing, fiery femininity that I was very drawn to at an early age. She would say things in such a way that would take you aback because it was so fearless and so on point and with a dry sense of humour. She was a close friend of my father’s so she would come on picnics with us. I only got to know her as an artist later on in my twenties.

So, knowing her personally, you saw her as a friend, as a woman, rather than someone representing First Nation people?

That’s right and in a sense that was more challenging for me because what was I trying to get out of this portrait of her? What came out of it was a lot of energy, very spirit-based, the wings of a bird. She has a very free spirit, particularly when she’s had a little alcohol,  whoa, she can be quite crazy (laughs).

In your portrait of Laurie Anderson, you’ve melded yours and her heads together, she under your throat, presumably to show her influence.

Her head is like a flame. When I started to investigate her and to try to understand who she was, she was a huge inspiration and a strength to me about getting out of your way. Just say what it is you want to say, be who you are and believe in your voice. She was married to someone substantial (Lou Reed) and she’s worked her own voice. She’s not a trained musician so to speak, just takes her music and talks over it, sings, creates film and as she said in one of her interviews ‘I call myself a multi-media artist but I’m not anything. I just do what I do’. Unfortunately, in this day and age you have to place yourself somewhere, people want to know what kind of an artist you are.

Surrounding the two merged heads you have this light brown design. What’s behind that?

It began after I heard her speaking about her having lost everything in a flood that she had in the basement of her apartment in New York. After I listened to it I went for a walk and it had been raining and I saw in this puddle all this movement and all these shapes and I saw her and how that must have been.

The self-portrait you call Lucy stands next to a hooded figure. What’s behind this idea?

I made the cape myself and didn’t realise when I was making it that it would be part of the portrait. Then I realised that the photograph of myself was going to be about me emerging from this cape. The symbol is of me peeling myself out of an old skin, an old self that no longer is needed. Having gone through the process of studying these women and how they relate to me, this was the epiphany of me saying right, now it’s time to strip away all that which is holding me back as a fearless artist and express myself.

And would the thing that you’re emerging into be what you call the feminine spirit?

Exactly. The photograph of me is very vulnerably free. It has no reservations. It’s like lifting out and almost lifting up, possibly about to float out almost like the caterpillar coming out of the cocoon and developing into the butterfly. The feminine spirit is a spirit that is gentle, it’s strong, it’s compassionate, it has self-preservation, it will take on board what’s healthy and what’s unhealthy so it can receive criticism but will not feel endangered by that. And I think if we women can embrace more  of the feminine spirit and support each other to embrace that, and feel comfortable in who we are, then there would be less of women feeling she needs to be aggressive and physically strong to get her point across. If we can be stronger with our vulnerability and our softness, the male species would feel less threatened and feel less need to somehow dominate over us. I think this would be very beneficial to the process of getting the imbalance back in shape.

All images are courtesy of the artist