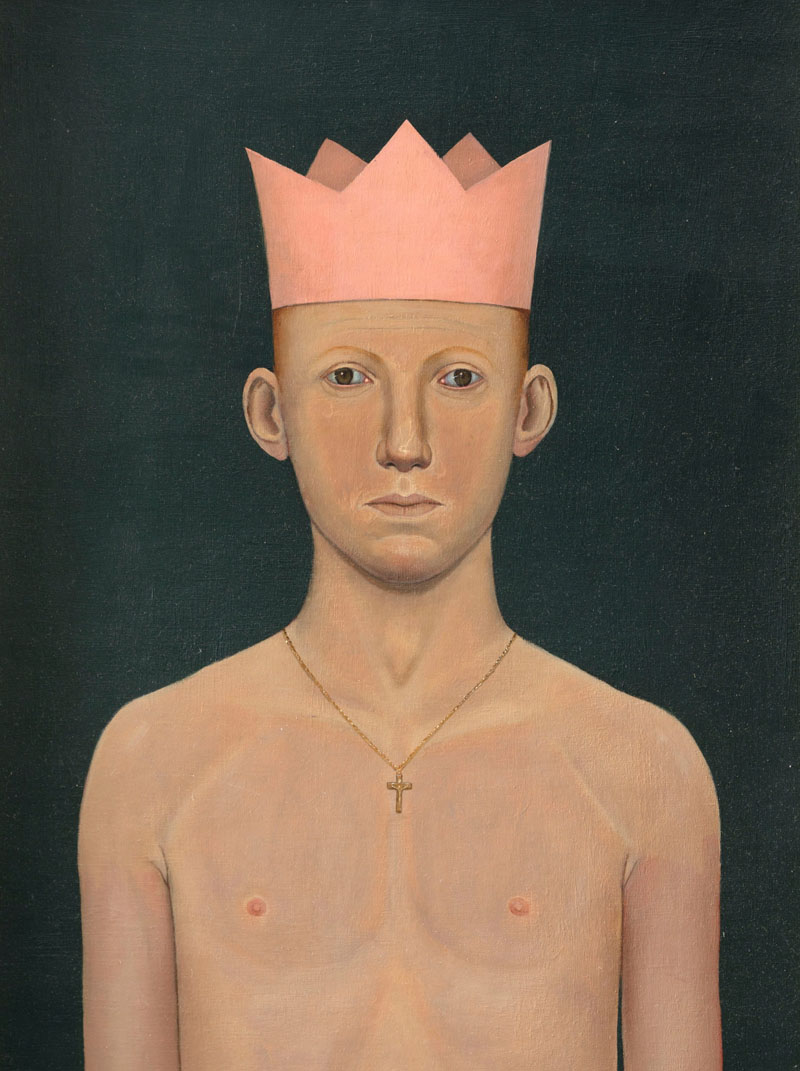 Some years ago, a friend of John Kirby developed a brain tumour which made him both depressed for his friend and depressed for himself. It was around Christmas time and the pair pulled a cracker which contained the regulation paper hat. “I looked totally miserable wearing this pink or yellow hat. It’s a kind of move towards enjoyment without getting anywhere near it,” he tells me.

He appropriated the affectation and the hat became a recurring motif and appears in several works in his latest exhibition of oil paintings at Flowers Gallery, Cork Street that brings together new and recent works alongside selected paintings from the past two decades.

John Kirby’s art sells for high sums thanks to a reputation earned over many decades for his dreamlike characters, expertly crafted, that reflect his struggles with childhood and themes of isolation and repressed emotion and sexuality. A graduate of the Royal College of Art, he has exhibited extensively in Europe and the United States and prestigious institutions like the Tate and the V&A  have his work in their collections.

In the ironically titled, House of Fun, above, the two characters appear almost wax-like at a table with a skewed perspective. It reflects a skewed view of life which Kirby describes with a smile as “a bit of a pain in the arse”. There’s something slightly disconcerting about the piece of paper the standing man is holding in his hand as if the other figure has got to be seated in order that he can bear its bad news.

The artist describes himself as “inclined towards melancholia”, a word he prefers to depression. His figures, whatever their outward appearance, are generally reflections of himself. They have that far-away stares in their eyes, as if they’re looking but not really seeing. “Billie Whitelaw,” he recounts, “when she was being directed by Samuel Becket, asked him ‘where should I look?’ and he said ‘inwards’ and that’s what that’s about really.”

Kirby was brought up in a strict Catholic family in Liverpool. “I think I was born with a bit of depression in the family really and I kind of bore it because of my theatricality or whatever. It’s become a recurring theme in my life never mind my painting.”

As if the almost clichéd baggage of guilt that can accompany that religion wasn’t enough, Kirby had the added stigma in 1950s England of discovering he was gay. He’d dream of going to sleep at night and waking up normal. “People don’t think it’s a big deal anymore which is great and how it should be, but it was a very big deal when I was growing up. I was the only person in the world who was gay.”

Many of his paintings reflect the pain of having to suppress feelings of guilt and genuine emotions and feelings. Some of his portraits’ subjects comprise people dressed up to the nines as if for a wedding or other such formal occasions. It harks back to the days as a child when he would sneak in and dress up only to get told off by his parents and be laughed at by his brothers. These and other works that feature transgendered, doll-like figures are reactions to this aspect of an otherwise ordinary childhood.

He disputes any notion that they are allegories. “I don’t try to get too involved with anything other than what’s going on at that moment on the canvas and what I’m thinking about. I’m not interested in putting a message over of any kind or making a moral statement. I’m just trying to illuminate things, my thoughts, for myself really.”

The naked son being embraced by his father, above, is a touching symbol of innocence and childhood and represents two aspects of the same person. Kirby believes that childhood is a state that has been over-romanticised, certainly in the western world at least. We often think of our childhood as endless sunny days in which negative aspects are filtered out and its complexity denied. Kirby is of the view that we never fully escape it. “You don’t grow out of this child thing that you were born into. You never make the transition and when you’re a child you look at adults and think one day I’m going to be grown up like them and I’m still waiting for that, aged 70.”

John Kirby will admit that despite his difficult early years and his melancholic disposition, he lives a contented life with his partner and his dog, the last of whom has become a regular feature of recent paintings. His themes are thoughtful, deeply personal with a universal relevance yet are looking increasingly dated. Gender flexibility and ambivalence are subjects talked about constantly today. Homosexuality has long been accepted and celebrated in most aspects of western society. Kirby admits that maybe he has been banging the same drum for too long.

“I think, for good or ill, I’ve done it and I don’t want to carry on doing it otherwise it’s like throwing a pebble in a pond, the ripples just get fainter and fainter. I’ve got a very limited thing to say about the world and I think I’ve said what I’ve got to say and this is possibly the last time I’ll have a show.”

The title All Passion Spent are the final three words of John Milton’s book Samson Agonistes which John Kirby has borrowed to reflect the search for inner peace following internal struggles.  It’s a very pertinent title.

The exhibition is showing at the Flowers Gallery, 21 Cork Street, London W1S 3LZ until 30 March 2019