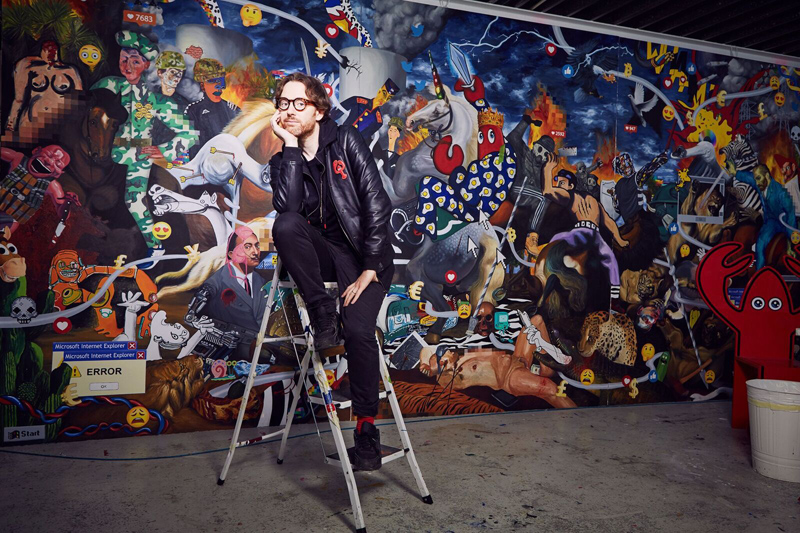 This is the cacophonous and surreal world of Philip Colbert whose latest and largest pop art extravaganza presented by Unit London at the Saatchi Gallery, entitled Hunt Paintings, is drawing multitudes. When I left a crowded preview after an hour, the queues to get in extended well into the King’s Road. That’s nothing. A recent Colbert exhibition in China drew 10,000 to its opening.

On view at the Saatchi are 25 works centred around monumental oil painted collages referencing the hunt works by old masters such as Rubens, Delacroix, Bruegel, van Dyck et al but in a style that leads on from Warhol, Hamilton, Rosenquist and Lichtenstein. They form a curious mixture of the playful with their cartoon characters and digital age reference points, and the violent encapsulated in the hunt. The top shot sees the artist posing before his Dark Hunt Triptych, nearly 6 metres long and 3 metres high and with a six-figure price tag. Satire against art elitism is big business.

“I like the deep historical grandeur and I like juxtaposing it with these very colourful topical  references because in a way I was trying to explore the violence in contemporary culture and by using these very traditional celebrated images of violence it was a way of engaging with this idea of violence in a a way that’s very celebrated and iconic.”

Colbert is speaking to me wearing a crimson suit with matching baseball hat. He is well-known to his followers not only as an artist but also as a fashion designer. He founded the iconic label The Rodnik Band whose dress designs include those based on Warhol’s Campbell’s soup can, the urinal of Marcel Duchamp’s Fountain and Van Gogh’s Sunflowers. Not one to miss out on the opportunity for cross-referencing his products, his trademark fried egg design appears in most of his artworks. The Colbert sportswear logo is plastered all over the gallery’s walls.

The contemporary violence he talks about he believes to be more insidious than that depicted in the epic and heroic hunting scenes of the Old Masters. Though there is the occasional splattering of blood in his works, the violence lies mainly and deliberately in the undertones. “Contemporary violence is much more hidden, much more about destroying the planet on a much grander scale,” he says.

The sheer number of details and figures that comprise Colbert’s paintings is a reference to the hyper saturation of modern culture and our ferocious appetite for image consumption. Yet he’s making no particular judgments. “I’m celebrating good and bad. There are a lot of amazing things in our contemporary society while at the same time I’m celebrating the language and the brands and the connections with all these things that people share. But I’m also touching on the dark shadow of it all, so yes I’m questioning the sustainability to consumers of it all.”

All the works on show were completed within a year, aided by a team of assistants. He starts with sketches and uses google images as a tool. He says he loves the fact that any individual is able today to access an almost infinite amount of imagery on the internet. “There’s an amazing creative democracy to images, and I like the idea that my art represents the individual’s ability to re-contextualise grand, potentially crushing history and being able to turn it upside down.”

Colbert’s works are bright, easily accessible, fun and exuberant. It’s easy to see why they have become so popular especially, as with other pop art collagists, the symbols are oh so familiar and the branding relentless. Though each painting, and sculpture for that matter, are on broadly the same theme, each vary between the positive and the negative, light and dark. Some contain more abstraction than others.

I did like the art historical references sprinkled throughout all of them. Not only are there the hunt features but also various different artistic styles such as cubism, abstract expressionism, classical and so on. Every so often you find the face of a Van Gogh or a Dali.

It was Dali whose lobster telephone became a symbol of surrealism and it’s coincidental that one of these telephones has this week been bought by the National Gallery of Modern Art in Edinburgh. The lobster has become Colbert’s alter ego. It’s what drives his paintings’ narratives. A large sculpture of a cartoon lobster stands in the centre of one of the two galleries in which the show is staged. “I’m a symbol of surrealism,” he insists. “I’m a protagonist of surrealism. It’s a creative opportunity having an alter ego. It gives you the freedom to fuck around and do whatever you want. I’m a cartoon character with infinite possibilities.”

Hunt Paintings is showing at the Saatchi Gallery until 13 January 2019.

All images are courtesy of the artist and Unit London.