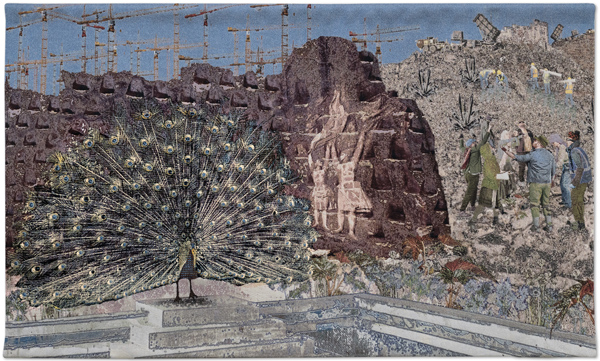 For more than 25 years, the New York-based collaborative duo Anthony Aziz and Sammy Cucher have addressed current political dilemmas through large format digitally enhanced photographs and video installations. However, a visit to a Renaissance tapestry exhibition at the New York Met a few years ago inspired this latest exhibition at London’s Gazelli Art House of four monumental tapestries as well as a series of accompanying works on paper.

“The mythological, the political, the biblical, the allegorical all came together in a narrative and a way of telling stories and creating composition in woven imagery,” explained Aziz, as we walked around the exhibits. “It inspired us to think how we might do that for the current moment to create a kind of history painting for the present through the language of tapestries.”

The result is a spectacular interpretation of current events writ large at a time when the world situation seems in turmoil, with the refugee crisis, the emergence of right-wing populism and increasing polarisation of views on religion and politics. The image above, Some People, consists of stills taken from a previous video installation in which a group of dancers (present in all the tapestries) strike certain poses. These have then been collaged together against an unsettled background into the single composition. The image is then exported as a complex, digital weaving file to be woven with a special digital Jacquard loom in Belgium which can produce a wide range of colour.

The result is a scene of apocalyptic chaos and confusion in which ambiguity reigns, a reference to how the artists view the world today. We’re not sure exactly what emotions are going through the figures’ minds. Have they been shot or undergoing some kind of revelation? At the top, there’s a celebratory traditional dance taking place while elsewhere there is despair.

“The figure of the dance is an interesting motif for us because even in the conflict situations that are represented in the tapestries, conflict is never absolute,” says Cucher. “Other people are celebrating or even the plain idea that wars and terrible catastrophes go on but people still get married or celebrating life in a different way so we never wanted to create a perspective that was single-handedly tragic but more of a combination.” At the top left of the picture we see a kind of futuristic building with the idea that modernity rises from the dust. The same goes for the cranes you see in the top image, The Visitor, above the peacock which itself is an emblem of innocence, something above politics.

On the right of the tapestry Aporia, above, the artists have included themselves in the picture dressed as clowns. Aporia is a Greek word signifying a permanently unresolvable state. This would apply to the seemingly intractable Israeli-Palestinian struggle, a conflict that has engaged the duo regularly in their work. Sammy Cucher has family living in Israel while Anthony Aziz has Lebanese roots.

While all the figures appear to be protesting at everything with military drones hovering like birds of prey above them, the clowns look somewhat out of place. “When we first started working on this subject matter relating to this region in the Arab world, we felt very absurd even touching the subject of conflict as if we could contribute something meaningful to it,” says Aziz. “So the clown figures are the first self-portraits of us in our work. It’s important that we’re in the narrative but absurdly disconnected from it.” Aziz and Cucher have spent time in the Middle East and other war-torn areas such as Bosnia-Herzegovina which have imbued them with a sense of their own inadequacy.

In The Road, above, the clowns are replaced with a pair of doctors in protective clothing. The Ebola crisis had erupted during the conception of the piece and so they included a reference to it. You can see a Jewish settlement in the background and against the Biblical-like scene with sheep nestling between the bits of rubble, people take photos and selfies with their smartphones. “I was thinking about how images are the vehicle for us to gain access to so many of these events in the world but often become backdrops for our position in relation to those events which can become meaningless,” explains Aziz.

Included in the exhibition are six digital silk screen and gold leaf prints. The artists see them as companions to the tapestries and they are based on the traditional Greek frieze in which faceless figures are intertwined and dancing. They’ve included animals and fruits in Renaissance style. I asked Sammy Cucher if there was anything polemical about the works in the show. His reply was unequivocal. “We don’t take sides. We’re interested in the difficulties in the conflict in the area of relationships that exist where sometimes two truths can co-exist in which there are no options . If you take sides, you immediately become an enemy and that’s not what we want to do.”

The exhibition runs at the Gazelli Art House, 39 Dover Street, London W1S 4NN until 24 November 2018. All images are courtesy of the artists and gallery.