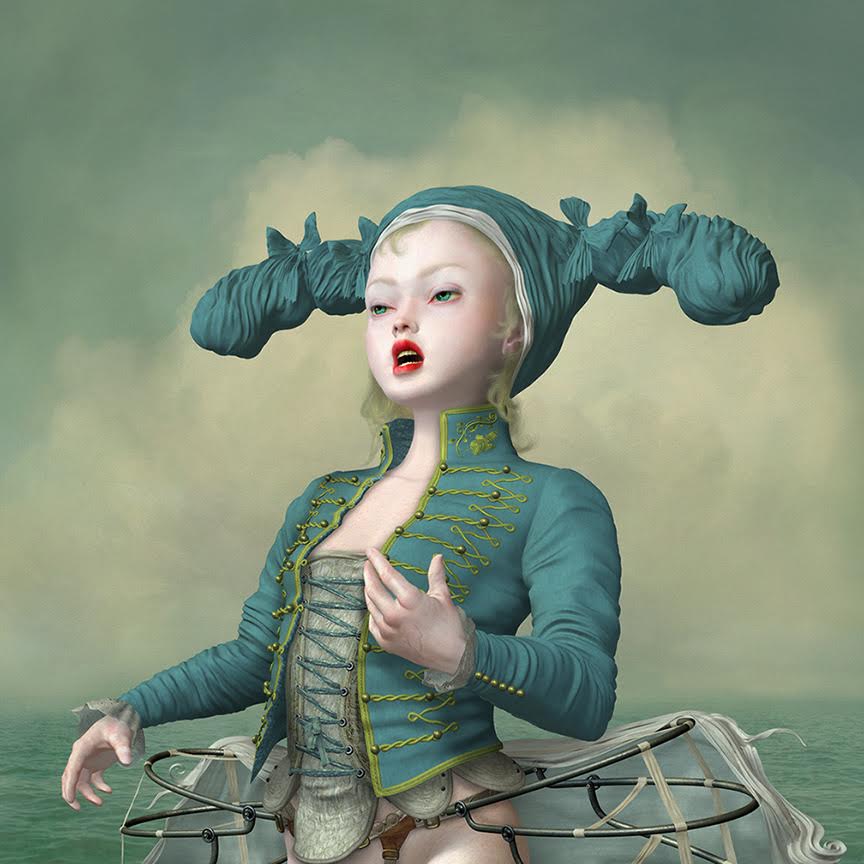 Surrealism has come to Islington in a most macabre form as the James Freeman Gallery exhibits two masters of the contemporary style of the genre in Carolein Smit and Ray Caesar. The pair are quite unalike and work in different media. Yet both share a penchant for unsettling the viewer with images intended to disturb. They also both reference art history in their own ways.

Dutch artist and ceramicist Carolein Smit, for example, is part of a continuum of her country’s Vanitas tradition dating back to the 16th century which focuses on the transient nature of life. Her work is not for the faint-hearted. Skeleton is the most in-your-face example of this, practically an ossuary at the feet of a skeleton in which the subject’s chin rests on its hands in contemplation.

“All my themes always refer to death because it’s what we’re all going towards which makes life very interesting”, she tells me as we wander around the exhibition. “It makes you wanting not to waste a day. It’s the knowledge that in the end, you’re going to have to end this life. I think that’s exciting.”

Skeleton represents a dark side of the subconscious as a kind of mirror image of oneself. It rides that precipice between love and hate, good and evil all served up with a pinch of irony. She achieves it via low-fired earthenware on which the artist has applied in her words “a shitload of glaze”. Smit didn’t come to ceramics the traditional way. Her basic training was in drawing and graphics. In 1995, she made some drawings that were very three-dimension-like and wondered why she couldn’t make them in actual 3-D.

She took a course at the Ceramics Workings Centre in Holland where they supplied her with everything she needed – clay, knowledge of techniques, clays, kilns and so on. She fell in love with the medium. “I’ve never made a drawing since”, she says proudly. Now her work is to be found in permanent collections across the world including three in the V and A, where, incidentally, she also has a solo exhibition running concurrently with this one entitled Myth and Mortality.

The mouse eating the berries is typical of her theme. The mouse is clearly enjoying life in what looks like an idyllic scene, the vanity if you like. But in the undergrowth a snake lurks. Not only is the contrast apparent, it also extends to the object itself in that the softness of the mouse’s skin is created using the hard earthenware material.

Though an atheist, Smit uses familiar Biblical stories as well as myths and fairy tales to inform her themes. “I read a lot,” she says. Take her sacrificial lamb, for example. With its bound feet it’s clearly about to meet its maker. Its fleece could also double up as worms which it surely will soon become. “I strive to make it look soft but to make it look horrible. If I succeed, it’s good.”

Less gory but disturbingly other-worldly are the works of Ray Caesar. Born in Britain, he moved to Canada at an early age and has remained there since. He is an acknowledged master of digital art and his work is owned by such luminaries as the Hearst Family, Riccardo Tisci Givenchy, Madonna, Metallica, and both the Museums of Modern Art and Guggenheim in New York.

If you didn’t know otherwise, you could be forgiven for thinking that his work is painted, yet it’s all created with the computer animation and modelling software, Maya. His signature are the figures he calls his dolls, dressed up in historical attire with faces suggesting they’re caught in some sort of ghostly after-life or limbo.

Festival of Light, in the words of gallery owner and curator, James Freeman is like “Commedia dell’arte meets Watteau”. In their dreamlike rural setting, the figures are confronted by this curious jellyfish-type creature seemingly lit by electric light. One figure plays a lute, another has a fake nose. These bizarre characters have cropped up in earlier works too.

Caesar’s works are renowned for their intricate detail. He’s been known to scan human skin, work on it and turn it into the folds of the fabric you see on the dresses or the vegetation. “The thing to get when you’re looking at Ray’s work,” says Freeman, “and why I think it’s an interesting kind of surrealism, is that it’s highly detailed and intricate but on the other side it’s about how imagination works. It throws things together that don’t belong together.”

Like Carolein Smit’s work, Ray Caesar enjoys the contrast between hard and soft both literally and metaphorically. In The Nature of Gravity you have this huge breast-like rose in the familiar jungle setting yet half-hidden in the undergrowth is a hard, sharp and bizarre metal contraption. For 17 years, Caesar worked in the art therapy department of a children’s hospital treating both physically and mentally scarred patients. On his website he writes, “It is so clear to me that this is the birthplace of all my imagery. It is appropriate that I now live my dreams for those that didn’t get a chance to live theirs…. to do otherwise would be a sin.”

Although his paintings defy most symbolic interpretations, it has been suggested that flowers represent the tenderness of youth that needs to be kept alive through technology represented here by the metal object. The one has to go with the other despite their apparent contradiction.

As with Smit, Caesar likes to add the sinister touch. The Collector is enticing the hummingbird away from its nest using a tempting, perfumed flowers held in her sharp teeth. She holds the cage ready to trap it. Yet why this figure should be in a steaming jungle wearing the most inappropriate outfit is anyone’s guess. Therein lies the appeal.

Both artists spin their fairy tale worlds in their distinctive ways delving into the wondrous and the disturbing parts of the human psyche.