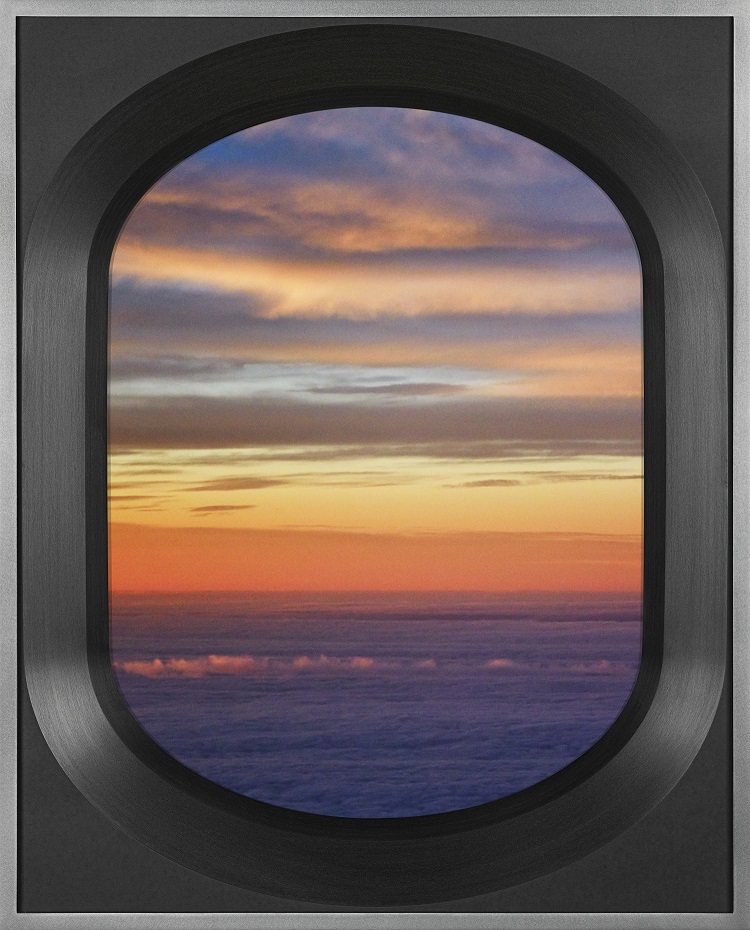 Like many people, I find plane travel a necessary but uncomfortable experience. I’ve no fear of flying but being crammed in and cramped up inside a narrow cabin following hours of hanging around at airports is not my idea of heavenly bliss.

One of the few compensations is being able, assuming one has a window seat with a view not obstructed by a wing, to gaze out at the vast space above the clouds. Here the imagination can run wild as the formations of cloud become mountain ranges, volcanic eruptions or beds of cotton wool.

So, I was drawn to the exhibition of London-based American photographer Scott Mead who has spent the past decade capturing the density and complexity of memorable moments on plane journeys by taking photos from the windows of scheduled airliners. Mead finds gazing out of the window gives him a feeling of tranquility and clear perspective on past, present and future, enabling, he says, “to connect more fully with his inner self.”

His new exhibition, Above the Clouds, at London’s Hamiltons gallery does not disappoint. It contains a portfolio of wonderful images – clouds bathed in the red glow of sunsets, fluffy clouds resembling flocks of sheep, tropical islands in a turquoise sea, roads snaking across mountain passes, ice packs arranged like tectonic plates, swirling ocean tides and ripples of distant waves.

To make these images compelling is not as simple as you might think. First, there’s the difficulty of finding the right balance between shutter speed, lens aperture and camera light sensitivity, ISO. The light is forever changing, and the colours of cloud, light and sky have to be balanced too. Then there are the constant reflections to cope with in a plane that might be changing direction or altitude. There is also the problem of scratches on the window that have to be removed. Oh, and first of all you might have to persuade the person in the window seat to swap places! “I was not always lucky,” Mead says.

Mead spent a lot of time analysing flight paths, the angle of the sun, the curvature of the earth and the times of sunrise and sunset, among others, to cope with these obstacles. He’d take such factors into account while planning flights which were primarily taken to reach a certain destination but made more meaningful by his photographs. So why not charter a flight to make photography the prime purpose?

“I wanted to be open to chance encounter and the ‘found moment,’ to randomness, to chance. This approach seemed more authentic, more like the way one experiences life as it unfolds.”

The exhibition also contains city views taken as the plane is about to land. I found these less interesting since they lose the capacity to fire the imagination. However, in a triptych of New York from above, Mead has managed to capture the Big Apple at sunset amid the twinkling lights of traffic and the various bridge illuminations.

Each photograph is framed to simulate an aircraft window and the gallery is darkened, creating the impression that the landing lights have been turned off as the aircraft begins its final descent.

The proceeds from the sale of the prints and the accompanying book will go to Great Ormond Street Children’s Charity. Scott Mead’s baby son was cured of a life-threatening illness at GOS many years ago.

Among his favourite photographs is this one taken near the Grand Canyon. It suggests, he says, abstract expressionist works or even the gentle curved forms of Monet’s water-lilies.

“ This beauty in the context of a remote, desolate, dry and inaccessible landscape for me evokes the many contrasts in life’s experiences and that sense that there is beauty all around, even in unexpected places.”

Above the Clouds is showing at Hamiltons Gallery, 13 Carlos Place, London W1K 2EU until 19 January 2018. The images are courtesy of the photographer and gallery.